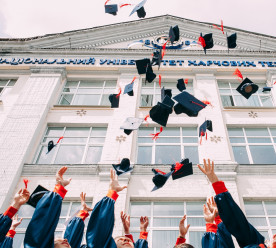 200 institutional investors, with a combined $6.5 trillion in assets-under-management, have announced they are calling on 47 of the largest U.S. publicly traded corporations to align their climate lobbying with the goals of the Paris Agreement. The investors said they view fulfilment of the Paris Agreement goal — to limit the global average temperature increase to well below 2°Celsius and pursue efforts to hold it at 1.5°Celsius — as an imperative. The 47 companies called upon to act included Procter & Gamble, Coca-Cola and American Airlines, representing some of the U.S.-based corporations and some of the largest corporate greenhouse gas emitters. The investors also warned that lobbying activities that are inconsistent with meeting climate goals are an investment risk. The letters were sent on behalf of a group of lead investors including BNP Paribas Asset Management and Boston Trust Walden Company and supported by 192 other institutional investors. (Ceres)

A survey by graduate recruiter Milkround has claimed some firms are using a system that filters candidates via the league table position of their universities meaning graduates of 24 top UK universities are more likely to find work soon after graduating than those from other universities. Four-fifths of graduates from Russell Group universities, some of the best in the UK, are entering full-time work within weeks of graduating compared with two-thirds of those from other institutions. A separate poll of 7,000 students for Milkround found a significant minority wanted recruitment to be carried out “blind” to candidates’ gender, religion and anything that would denote socio-economic background. Several high-profile firms, such as Deloite, KPMG and the Civil Service, already use name blind application processes. Dr Jack Britton, at the Institute for Fiscal Studies, found, in 2017, Russell Group graduates earned an average of £33,500 after five years – about 40% more than those who had studied at other universities. (BBC)

Global technology giant Bosch has announced it is going to become fully carbon neutral across its global operations from next year, hailing the move as “unprecedented in scope and timeframe”. The manufacturer of household appliances and industrial equipment said the commitment would cover 400 locations worldwide, including 39 in the UK. In order to meet the carbon neutral goal, the company said it would step up green energy sourcing efforts, invest a €1 billion in energy efficiency measures through to 2030, and secure carbon offsets certified to rigorous standards to compensate for any remaining emissions. Dr. Steffen Hoffmann, president of Robert Bosch UK and Ireland, stated that multinational businesses must play their part in supporting consumes and governments for the world to be carbon neutral by 2050. The company currently emits around 3.3 million metric tons of carbon each year but has now said that once it achieves climate neutrality it will make a significant contribution to the Paris Climate Agreement. (Business Green)

The Lloyd’s of London boss has said he was “devastated” by a report on sexual harassment against women working in the insurance market as he pledged decisive action to put an end to behaviour ranging from inappropriate comments to physical assault. The world’s biggest insurance market commissioned a major survey into its culture after an investigation by Bloomberg in March detailed widespread harassment. The results of the survey will be released in a report on 24 September. The Lloyd’s chief executive, John Neal, admitted that the survey “is validating that those problems exist”. The company will announce several core actions to deal with gender equality, but he cautioned this this is a problem that will take time to fix. The survey, conducted by the independent Banking Standards Board, was sent out to the 45,000 people who work at the insurance market, including Lloyd’s 1,000 direct employees. The building in the City of London houses thousands of brokers, underwriters and staff employed by other insurance firms. (The Guardian)

Coca-Cola European Partners (CCEP) will replace plastic shrink wrap across its four, six and eight-packs of cans for all its brands sold in the UK, including Fanta, Sprite, Dr Pepper and Lilt. Over the next 18 months, the plastic packaging will be replaced with cardboard, which is already used for multipacks of 10 or more cans. According to CCEP, more than 30 million packs sold to consumers each year will no longer be wrapped in plastic. Instead, the multipacks will be packaged in 100% recyclable cardboard from Forest Stewardship Council (FSC) or Programme for the Endorsement of Forest Certification (PEFC) certified sources. While the shrink wrap currently used is recyclable, it is estimated that only 10% of UK local authorities collect the material. In comparison, 98% of cardboard is collected as part of household recycling. The news comes as parent firm The Coca-Cola Company is aiming to make all bottles globally with an average of 50% recycled content by 2030, up from its 2017 proportion of 7%. (edie)

Image Source: group of fresh graduates students throwing their academic hat in the air by Vasily Koloda on Unsplash.