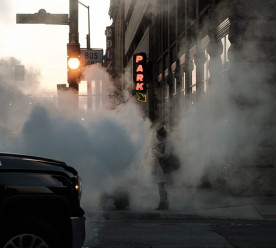 Britain’s biggest environmental groups have warned the British government that funding to tackle the climate emergency must be more than doubled next year to avoid an even greater cost from catastrophic ecological breakdown in the future. Writing to the chancellor, Sajid Javid, as he prepares to announce his spending priorities for the year ahead this week, more than a dozen charities, including Greenpeace, Friends of the Earth, Oxfam and Christian Aid, said urgent action was required to raise spending. Spelling out their demands in a costed roadmap for meeting the climate emergency, the groups said that government spending needed to increase from roughly £17 billion a year at present to at least £42 billion over the next three years. Further increases would be required in the future should the government wish to meet its promise of net zero carbon emissions by 2050. Among the priorities put forward by the groups are removing heavily-polluting vehicles from the roads and investing in environmentally sustainable buildings. (The Guardian)

Packaging firm DS Smith has launched a new collection scheme to recycle coffee cups disposed of in the workplace. DS Smith has designed a “drop box” with capacity for up to 700 coffee cups, for companies to use in their offices. When full, the boxes will be collected from businesses by Royal Mail and returned to DS Smith’s paper mill, to be made into new paper packaging products. Nearly 60 per cent of British workers dispose of the coffee cups at work, making it a critical battleground in efforts to increase recycling. Some 30,000 tonnes of coffee cup waste are generated each year in the UK, according to evidence provided to the House of Commons Environmental Audit Committee inquiry on coffee cup waste, yet just one in 25 cups are recycled. Last year, DS Smith announced capacity to recycle 2.5 billion coffee cups but has struggled to collect enough cups to recycle, hampered by the lack of dedicated collection points. (Business Green)

Supermarket Asda has announced intention of a new charity clothing shop pilot to help customers find homes for unwanted clothes, with the proceeds of sales going to cancer charities. It is testing an in-store second hand clothing shop to encourage customers to reuse, repurpose or recycle unwanted clothes. The “Re-loved” pop-up shop will run for four weeks, in the retailer’s Milton Keynes store. It will feature donated second-hand clothes from a number of different brands, with proceeds from the shop going to Asda’s Tickled Pink campaign, which supports Breast Cancer Care and Breast Cancer Now. Around £140m worth of clothing ends up in landfill in the UK each year, according to waste charity WRAP. George, Asda’s fashion brand, is the UK’s second largest fashion retailer by volume in the UK. Under a strategy announced earlier this year, it has committed to make all its products with recycled or sustainable polyester, cotton, viscose by 2025. It also has clothing recycling points for customers at almost 500 stores. (Business Green)

A new report released by UK100, a network of city representatives such as mayors and council leaders, has shown that implementing Clean Air Zones which fine polluting vehicles, UK cities could collectively see an economic return of £6.5 billion. The report states that this figure accounts for lower healthcare costs and fewer sick days taken by workers, in addition to funding raised through Clean Air Zone Charges. A coalition of 14 city leaders from the UK100 is using the finding to lobby central Government for greater funding to implement Clean Air Zones – both for their own constituencies and more widely. Those taking part in the call to action include Mayors from London, Greater Manchester, Liverpool City and Bristol. This group of leaders have estimated that £1.5 billion of spending would fund a national network of 30 Clean Air Zones across England, covering most major cities. According to UK100, this funding pot should be split into £1 billion from central Government and £500m from businesses. (edie)