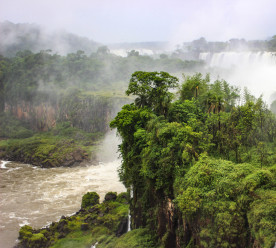 A report has shown that BlackRock, the world’s largest asset manager, holds extensive investments in the sectors deemed responsible for the devastation of forests in Brazil. With $6.5 trillion of total assets under management, BlackRock was labelled the “world’s largest investor in deforestation” by the report’s authors – Friends of the Earth US, Amazon Watch, and Dutch research firm Profundo. The report, BlackRock’s Big Deforestation Problem, looks at financial data from 2014 to 2018 showing the global investment management firm to be among the top three shareholders in 25 of the planet’s largest publicly traded companies with “deforestation risk”. The data reveal that BlackRock’s holdings in six sectors – soy, beef, palm oil, rubber, timber and pulp/paper – have increased by more than $500 million in the last five years. Of the 167 deforestation-risk companies identified by the researchers, BlackRock held shares in 61 of them – valued at $1.5 billion by the end of last year. (Al Jazeera)

In a bid to combat America’s powerful meat lobby, a group of firms producing laboratory meat from cultured cells have banded together under their own industry grouping, the Alliance for Meat, Poultry & Seafood Innovation (AMPS Innovation). The founding members for the new group are Memphis Meats, Finless Foods, BlueNalu, Fork & Goode and JUST. Together they plan to work with US authorities and Members of Congress to build a commercial pathway for laboratory meat. Announcing the official launch of AMPS Innovation, the firms said their grouping would be focused on “educating consumers and stakeholders about their new industry and advocating for a clear path to market for their products”. Cultured meat is grown in a laboratory directly from animal cells, which its makers argue is much more efficient, humane, and environmentally friendly than rearing an entire animal or fish. AMPS Innovation member companies are all still in R&D phase, but expect to have products on shelves soon, and are keen to clear the regulatory, ethical, and political ground for their arrival. (Business Green)

Independent Scottish developer Muirhall Energy is working with WWS Renewables to start construction of the 46MW Crossdykes Wind Farm and is expected to start producing power in September 2020. The timeframe means it could become Scotland’s first subsidy-free onshore wind project. Earlier this year, Greencoat UK Wind agreed to buy the 45MW Douglas West onshore wind project near Lanark in Scotland from Blue Energy, which is also being constructed without the support of government subsidies. Commission for that project is currently scheduled for July 2021. Muirhall Energy and WWS Renewables reached financial close in August, with Close Brothers leasing the funding the scheme. The UK Government has unveiled plans to add between 1GW to 2GW of renewable wind power annually throughout the 2020s, and, for the first time, remote island wind providers are eligible to bid for contracts. Muirhall Energy has also offered the local community the chance to purchase a community share offer of up to 10 percent of the total project. (edie)

Bosses who do not believe sexism holds back women’s careers are more likely to give jobs to men, a study based on recruitment for top French science research posts found. The results suggested that training hiring managers about sexist discrimination in the workplace could be a key factor in overcoming it, said researchers behind the study published in the journal Nature Human Behaviour. Toni Schmader, a psychology professor at the University of British Columbia in Canada, who was involved in the study said the evidence suggests people who recognise the barriers women might face are more able to “put aside their own biases”. Women remain under-represented in science and technology and are also less likely to be promoted into senior positions. The small French study used real data from hiring committees choosing between hundreds of expert scientists contending for elite research posts at the National Committee for Scientific Research (CNRS) to examine gender bias in hiring decisions. (Thomson Reuters Foundation)

Top mutual fund manager Vanguard Group Inc will ask companies to disclose the gender, age and race of their directors, adding pressure on U.S. companies to diversify their leadership. Vanguard gave the guidance in its annual stewardship report. With about $5 trillion under management and known for products like the Vanguard 500 index fund, the firm wields much influence over executives and directors at major U.S. companies. In addition to diversity measures, Vanguard asked boards to spell out their views on diversity, to broaden their search for minority candidates, and “to prioritise adding diverse voices.” Pressure has grown on U.S. companies to bring more women into senior leadership roles in recent years. It has been hastened by the #MeToo movement, a response to accusations of sexual assault and harassment in Hollywood and elsewhere. Vanguard has said in its report that it only wants descriptions on an aggregate basis whereas other companies, such as Regional Management Corp, have gone further by detailing the specific race and gender of company directors. (Reuters)