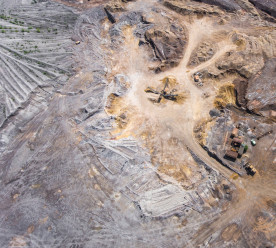 Environmental groups have voiced fears that the UK government is preparing to reduce fracking regulations after officials said they were considering reviewing earthquake safeguard rules. Fracking involves pumping high-pressure water, sand and chemicals into shale rock formations which fractures the rocks and releases gas. Opponents of fracking argue that, as well as contributing to sources of greenhouse gas-generating fossil fuels, fracking poses a threat to the local environment. The existing limits affecting shale gas fracking are strongly contested by the industry because they bring an immediate halt to fracking if even a minor tremor of 0.5 on the Richter scale is recorded. Campaigners raised concerns after the Department for Business, Energy and Industrial Strategy said they would consider opening a review of the existing fracking rules, following the outcome of a study by the Oil and Gas Authority, on data from the company Cuadrilla’s fracking attempts. Cuadrilla had been forced to abandon its first well after repeatedly breaching the earthquake regulations but has now resumed drilling in Lancashire. (The Guardian)

Judge Roberto Gallardo ordered the suspension of delivery apps in Buenos Aires over concerns that the companies don’t satisfy transport and labour laws after another courier was killed in July. Courier Ernesto Floridia, 63, was run over while delivering pizza ordered through Glovo, an on-demand courier service. When he texted the company about the accident, the co-ordinator queried about the food order and then asked for a picture of the products. Journalist Yanina Otero tweeted a photo of the exchange, which then went viral, in which Floridia’s phone appears to be smeared with blood. Gallardo has now ordered the suspension of delivery apps after finding that major players Glovo, Rappi and PedidosYa, failed to comply with the law – which the companies deny. He has also ordered credit card companies to block transactions made via the apps. Delivery companies will be fined ARS10,000 (£149.35) each time police checkpoints catch a courier breaching health and safety requirements. (The Guardian)

General Electric (GE) shares fell 11 percent after accusations that the conglomerate is using accounting tricks to mask the extent of its financial problems. Harry Markopolos, who alerted regulators about Bernie Madoff, published a report that said GE’s accounting irregularities added up to $38 billion and that the problems are focused on its insurance business. Markopolos is sharing his GE findings with regulators and said that some information was held back to be shared exclusively with law enforcement. GE said in a statement that it stands behind its financial reporting and called the claims “meritless”. It said it has the reserves to support its insurance portfolio and that it has a “strong liquidity position”. GE’s accounting practices are also being scrutinized by the US Securities and Exchange Commission (SEC) and the Department of Justice regarding a $6 billion charge to its insurance business and a $22 billion write-down to its struggling power division. (Washington Post)

Women producing jeans for American brands including Levi Strauss, Wrangler and Lee have been forced to sleep with their managers to keep their jobs or gain promotion, an investigation into sexual harassment and coercion at garment factories in Lesotho has found. The investigation, led by the US-based Worker Rights Consortium (WRC), also found that management failed to take disciplinary action against offenders, and that workers’ right to unionise was suppressed preventing them from collectively raising their concerns. Brands have responded to the allegations, by signing enforceable agreements with labour and women’s rights groups to eliminate gender-based violence for more than 10,000 workers at five factories owned by the Taiwanese company Nien Hsing, who are one the largest employers in Lesotho providing 40,000 jobs. Nien Hsing will also provide independently-appointed members access to its factories to interview workers and direct managers to refrain from retaliating against workers bringing complaints. WRC stated the agreements set an example for the rest of the apparel industry on how to address harassment and abuse. (Thomson Reuters)

More than 1,600 wildfires have been recorded in the European Union so far this year, more than three times the average over the past decade. According to Copernicus’ European Forest Fire Information System (EFFIS), an average of 464 wildfires was recorded by mid-August between 2008 and 2018. The EU disaster management system, rescEU, announced that it mobilised three planes from Italy and Spain to help Greece as it tackles wildfires in several areas. The south-east of France has been particularly impacted by heatwaves with record temperatures up to 46℃. This has led firefighters to raise alerts to the highest level. Arctic regions have also been incredibly impacted this year with about 13.1 million hectares decimated by forest fires in Siberia, according to Greenpeace. Greenland, which is home to the planet’s second-largest ice sheet, lost 160 billion tonnes of ice in July, which is 40% more than average. A 2017 report from the European Commission warned that “climate change will reduce fuel moisture levels from present values” and that the Mediterranean region would, therefore “become drier, increasing the weather-driven danger of forest fires”. (Euronews)