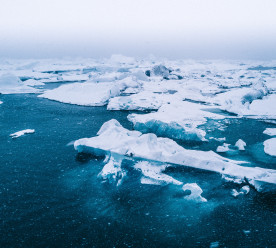 Plastic particles falling with snow in the Arctic

A new study has found that even in the Arctic, microscopic particles of plastic are falling out of the sky with snow. The German-Swiss team that conducted the study said they were shocked by the sheer number of particles they found – more than 10,000 particles per litre. The findings reveal how microplastics have spread even to remote areas where human populations are limited. The region is often seen as one of the world’s last pristine environments. The scientists found that the snow analysed included particles of plastic, along with fragments of rubber tyres, varnish, paint and possibly synthetic fibres. The researchers think microplastics are being blown about by winds and then – through mechanisms which are not fully understood – transported long distances through the atmosphere. Another study, published in April by a British-French team, showed that microplastics were falling from the sky onto the French Pyrenees and other research groups have found plastics in the atmospheric fallout of Dongguan, China, Tehran in Iran, and Paris, France. (BBC)

Pacific Islands leaders have begun negotiations over climate change and other policies at an annual summit, that will debate Australia’s refusal to embrace tougher emission reduction targets. Negotiations among leaders from the 18-member Pacific Islands Forum in Tuvalu are expected to be protracted after Australian Prime Minister, Scott Morrison, signalled he would not accept climate targets sought by other countries. Meanwhile, Australia, which has a large coal mining industry, has succeeded in removing all but one reference to coal on the draft communique of the Pacific Islands Forum. Seeking to improve its credentials in the Pacific, Australia offered A$500 million ($337 million) to the region to invest in renewables and prepare for the impacts of climate change and New Zealand said it will spend half of its already announced NZ$300 million ($193 million) allocated to address the impact of climate change in the Pacific. (Guardian, Reuters)

UK infrastructure company Peel Environmental has signed a collaboration agreement with Waste2Tricity and PowerHouse Energy which will see 11 waste plastic to hydrogen facilities developed with a total investment worth £130 million. Using advanced thermal treatment technology, the new facilities changes the way waste plastics are treated, with one facility taking up to 25 tonnes of non-recyclable plastic each day to generate a local source of hydrogen. The low-cost hydrogen can then be used to power buses, HGVs and eventually to hydrogen-based cars. This technology provides a solution to plastics that would otherwise end up in landfill and reaching lower pollution levels. Recognising the importance of moving away from a linear economy and adopting technologies that minimise waste show and an example of how a circular economy can benefit the UK and help to achieve its net zero targets. (Business Green*)

Treasury kicks off review into ‘economics of biodiversity’

The UK government has officially launched its promised review into the economics of biodiversity, with Secretary to the Treasury Simon Clarke calling for the development of “creative and transformative solutions” to better protect natural habitats and forge “a sustainable economy in harmony with nature”. Launching the review with a speech yesterday, Clarke said there was “an urgent need to better understand the intricate relationship between human wealth and welfare, and the environment’s biodiversity and ecosystems”. First announced in the Spring Statement in March, the global review will assess the economic benefits of biodiversity globally, the costs and risks of biodiversity loss, and seek to identify a range of actions that can both deliver economic and biodiversity benefits. Led by economist and University of Cambridge Professor Sir Partha Dasgupta, the review will report back its findings to the government next year, ahead of the United Nations convention on biodiversity in Beijing in October 2020. (Business Green)

US women’s soccer team turn to court for equal pay

The 28 players who sued the United States Soccer Federation (USSF) for equal pay reported that talks have broken down. In March they took the USSF to court alleging they were consistently paid less than their male counterparts even though their performance has been superior to the men’s team. The lawsuit outlined years of institutionalized gender discrimination, claiming travel conditions, medical personnel, promotion of games and training are less favourable for female players, who have won the World Cup four times, than for their male counterparts. The federation countered that pay and benefits for members of the men’s and women’s teams, bargained by separate unions, can’t be compared and said there was no basis for allegations of illegal conduct. Federation President Carlos Cordeiro stated that the federation paid out $34.1 million in salary and game bonuses to the women between 2010 and 2018 as opposed to $26.4 million paid to the men. However, the Women’s team have disputed the figures, claiming they are misleading.  Unable to reach a resolution, the players have decided to take the case to court in front of a jury trial. (Reuters, NBC)