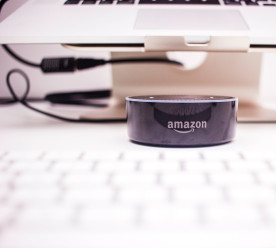 Hundreds of schoolchildren have been drafted to make Amazon’s Alexa devices in China in attempt to meet production targets for the tech giant. Interviews with workers and leaked documents from Amazon’s supplier Foxconn show that many of the children have been required to work nights and overtime to produce the smart-speaker devices, in breach of Chinese labour laws. According to the documents, the teenagers are classified as “interns”, and their teachers are paid by the factory to accompany them and encourage uncooperative pupils to accept overtime work. Some of the pupils making Amazon’s Alexa-enabled Echo and Echo Dot devices along with Kindles have been required to work for more than two months to supplement staffing levels at the factory during peak production periods, researchers found. More than 1,000 pupils are employed, aged from 16 to 18. Foxconn admitted that students had been employed illegally and said it was taking immediate action to fix the situation. (The Guardian)

The agrochemical company, Monsanto, operated a “fusion centre” to monitor and discredit journalists and activists. In particular, it targeted a reporter who wrote a critical book on the company, internal documents reveal. The records reviewed by the Guardian show Monsanto adopted a multi-pronged strategy to target Carey Gillam, a Reuters journalist who investigated the company’s weedkiller and its links to cancer. Monsanto paid Google to promote search results for “Monsanto Glyphosate Carey Gillam” that criticised her work. Monsanto, now owned by the German pharmaceutical corporation Bayer, also monitored a not-for-profit food research organisation through its “intelligence fusion centre”, a term that the FBI and other law enforcement agencies use for operations focused on surveillance and terrorism. The finding adds fuel to the ongoing claims in court that Monsanto has “bullied” critics and scientists and worked to conceal the dangers of glyphosate, the world’s most widely used herbicide. (The Guardian)

The global green bond market hit a new all-time quarterly high during the second quarter of this year, as issuers brought $66.6 billion to market, according to the latest update from financial services firm, Moody’s. The influential credit ratings giant said global green bond issuance was now on track to surpass $200 billion by the year’s end, setting a new record for the market in the process. Issuance grew 47 percent to $117 billion during the first six months of 2019 compared to the same period last year, Moody’s latest quarterly green bonds market report found, with corporates providing the strongest contribution during the second quarter with over 40 percent of the total. European issuers lead the way with a 54 percent share of the global green bonds market in the second quarter, aided by the Dutch government’s huge $6.7 billion sovereign bond earlier this year. The Asia-Pacific region achieved a 23.8 percent market share, followed by North America on 13.1 percent and Latin America at 3.9 percent. (Business Green)

Green Climate Fund’s (GCF) early equity investment in a solar power and pumped storage hydroelectric project will help decarbonise Chile’s energy mix and catalyse private investments to the renewable energy market. The GCF Board approved a $60 million equity investment in Espejo de Tarapaca (FP115), a renewable energy project in Chile’s northern province of Tarapacá. The project, which was submitted to GCF by MUFG Bank and will be led by the renewable energy developer Energía Valhalla, will ensure a stable and uninterrupted provision of renewable electricity. Fossil fuels account for most of Chile’s energy supply and the government has been working to increase the share of renewable energy in order to meet the country’s long-term sustainability goals. It has set a target for a 60 percent share of renewable power by 2035 and 70 percent by 2050. The Espejo de Tarapacá project is expected to decarbonise up to 5 percent of the country’s energy mix, thus helping Chile achieve its long-term climate objectives. (Green Climate Fund)

As a first for a UK supermarket, Lidl has begun selling reusable bags for consumers to put their loose fruit and vegetables in. Made from a durable mesh net, the bags are being labelled as “Green Bags” and are available at all of Lidl’s 760 UK stores. It is hoped that the zip-closure bags will discourage shoppers from using the clear, single-use plastic bags typically offered in produce aisles and sway them towards buying loose instead of choosing pre-packaged options. The nationwide roll-out of the “Green Bags” builds on Lidl’s move to eliminate hard-to-recycle black plastics from its fruit and vegetable lines, which was completed in 2018. Replacing the black plastics with alternatives such as cardboard and clear plastics has reduced the supermarket’s annual black plastics footprint by 50 tonnes. Lidl UK’s overarching plastics commitments are to ensure that all own-brand packaging is “widely” recyclable, reusable or renewable by 2025, and to reduce its plastic packaging by one-fifth by 2022, against a 2017 baseline. (Edie)