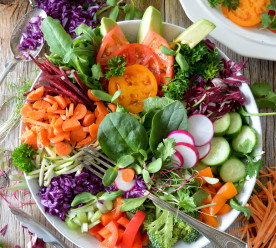 A new report by the United Nations’ Intergovernmental Panel on Climate Change (IPCC) has called for big changes to farming and eating habits to tackle climate change, but stopped short of explicitly advocating going meat free. The report said dietary changes, including significant increases of plant-based foods and sustainable animal-sourced food, could free up several million square kilometres of land by 2050 and potentially cut 0.7-8.0 gigatonnes a year of CO2e. The IPCC said agriculture, forestry and other land use activities accounted for 23 percent of total net manmade greenhouse gas emissions during 2007-2016. When pre- and post-production activity in the food system are included, that rises to up to 37 percent. The latest report also warned of more disruption to global food chains as extreme weather events become even more frequent due to climate change. It projects a median increase of 7.6 percent in cereal prices by 2050, leading to higher food prices and the increased risk of food insecurity and hunger. (Reuters)

Porsche lets customers carbon offset for as little as $59

Luxury car manufacturer, Porsche, is offering its customers the chance to offset their annual carbon emissions, as the auto industry comes under ever-closer scrutiny for their contribution to climate change. For as little as $59, US Porsche customers can offset the carbon emissions from their vehicles. Consumers can pay varying amounts depending on what they wish to fund. Lower offset prices include funding the Za Hung Hydropower plant in Vietnam or supporting for the Aura Solar I project in Mexico, a massive solar energy farm that’s helping to kick-start Mexico’s move to low-carbon energy. More expensive offsets include preserving forests in Zimbabwe or helping to protect trees on Afognak Island in Alaska. Porsche, sensitive to accusations of ‘greenwashing’, says that it has had each project independently certified by South Pole, a Swiss-based provider of carbon offsetting projects and sustainability financing. A debate persists over the effectiveness and ethical implications of carbon offsetting, with some critics arguing it presents a “license to pollute”. (Irish Times)

The University of Birmingham has been awarded almost €4.7 million in EU funding to develop a pilot facility capable of reclaiming rare earth metals from electronic devices with a view to developing a European supply chain for recycled magnets. The facility will focus on recycling magnets made from neodymium, boron, and iron which are often found in hard disk drives, household appliances, electric vehicles, and wind turbines. Use of rare earth metals has increased exponentially in the last 30 years, with demand expected to rise by 2030 thanks to increasing demand for consumer electronics and clean technologies. China produces around 80 percent of the world’s rare earth metals, but at present less than just one percent of is recycled. It is hoped that recycling the magnets could protect the supply chain for Europe’s manufacturing base, and that a new recycling process developed by the University could provide a key link for a new rare earth metal recycling supply chain. (Business Green)

Unilever has debuted a new Magnum ice-cream tub made using 25 percent post-consumer recycled plastic content. In what it claims is a first for the luxury ice cream brand, Unilever has produced 600,000 tubs, sending them to retailers across Belgium, Spain and the Netherlands. This initial roll-out is a precursor to the distribution of three million more of the new tubs across Unilever’s other European and global markets in 2020. The tubs are made using a mass balance approach, whereby post-consumer recycled plastic is mixed with virgin feedstocks in order to retain the material’s appearance and integrity. The new pots form part of Unilever’s broader five-point plastics reduction strategy through which Unilever is aiming to remove all plastic packaging which is not reusable, recyclable or compostable from its portfolio by 2025. The news comes after Unilever warned last month that it will sell off brands that do not contribute positively to the planet or society, making Magnum’s future at Unilever vulnerable. (Edie)

Public transport provider Arriva has revealed that it is “on-track” to achieve its decarbonisation ambitions across Europe as part of the company’s overarching and ongoing ambition to “use as little fossil fuel as possible” across the business. The company this week revealed that it has electrified half of its fleet of 200 buses in the Dutch city of Limburg, where Arriva has a 2026 goal to reach zero emissions. Arriva has additionally introduced 23 new fully electric buses the city of Leiden, where it holds the concession to operate all public bus services, since the start of 2019. Elsewhere in Mainland Europe, Arriva has delivered 13 new fully electric buses to the rapid transport system in Helsingborg, Sweden, and a further five to Kutná Hora in the Czech Republic, since the start of June 2019. To date, the company has reduced the nitrous oxide emissions of its average bus by almost 50 percent and the particulate matter emissions of its average bus by 60 percent, against a 2010 baseline. (Edie)