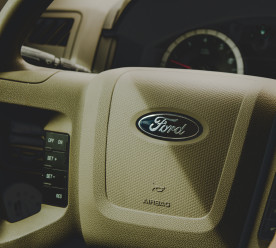 Four of the world’s largest automakers – Ford Motor Company, Volkswagen of America, Honda and BMW – have struck a deal with the state of California to reduce automobile emissions. The news comes as the Trump administration is expected to all but eliminate an Obama-era regulation designed to reduce vehicle emissions that contribute to climate change. California and 13 other states have vowed to keep enforcing the stricter rules. Under the agreement, the four automakers, which together make up about 30 percent of the United States auto market, would face slightly looser standard than the original Obama rule. Instead of reaching an average 54.5 miles per gallon by 2025, they would be required to hit about 51 miles per gallon by 2026, much higher than the Trump administration’s plans of 37 miles per gallon. Although California won the backing of the four companies in its showdown with the federal government, the Trump administration is still expected to try to revoke California’s right to set its own auto emissions standards. (The New York Times)*

Facing public pressure over contributions to plastic pollution, drink makers Coca-Cola and PepsiCo are cutting ties with the Plastics Industry Association. The beverage giants join other companies like household products company Clorox, medical device firm Becton Dickinson and hygiene and cleanings tech company Ecolab, which ended memberships with the trade association representing the plastics industry last year. The organization, representing manufacturers, has lobbied for US states to prohibit plastic bans across the country. Some of the firms that left in 2018 cited disagreements with the lobbying group over plastic bag pre-emption laws. A Coca-Cola spokesperson stated “we withdrew earlier this year as a result of positions the organization was taking that were not fully consistent with our commitments and goals.” While a PepsiCo spokesperson said that the company initially joined the Plastics Industry Association to learn about material innovation, but will end its membership at the end of the year since it “does not participate in the policy advocacy work of the association or its subsidiaries.” (CNBC)

Agribusiness giant Cargill plans to reduce greenhouse gas emissions by almost a third across its North American beef supply chain over the next decade, acknowledging that “there is a pressing need to do more” to ensure a reduced environmental impact. With growing public concern over the greenhouse gas emissions associated with meat consumption and cheaper alternative protein options hitting the market, Cargill has announced a target to cut the emissions intensity across its North American beef supply chain by 30 percent between 2017 and 2030. The target forms part of the firm’s new ‘BeefUp Sustainability’ programme, through which it aims to work with its beef producers and customers to drive greener and more efficient cattle grazing management, improve feed production and innovation, and reduce food waste. Cargill claims the climate impact of achieving the emissions goal would be equivalent to removing two million cars from US motorways for a year. (Business Green)

San Francisco-based food delivery company DoorDash has said it is re-evaluating how it pays workers after outcry over the company’s policy of using customer tips to subsidize base pay. In a series of tweets, DoorDash CEO Tony Xu said it had become “clear from recent feedback” that the company’s policies weren’t popular. Under DoorDash’s current system, tips left by customers via the company’s app are used to make up the minimum payment that DoorDash promises its workers. Many customers said they felt tricked by the policy and had assumed that tips went directly to workers — not to help DoorDash’s bottom line. The CEO has promised that “earnings will increase by the exact amount a customer tips,” which is being scrutinised for not promising a minimum wage with tips making up additional pay. Other delivery companies have engaged in this practice in the past, such as American tech company Instacart, but have since changed their policies. (The Verge)

Chile’s government, which is making sustainability a focus in the year it hosts the UN environmental conference, may shift more of its investments into environmentally sustainable projects. Officials overseeing the $14 billion Economic Stability Fund and the $10 billion Pension Reserves Fund are studying whether it makes sense to devote more of the money to assets that consider environmental, social and governance (ESG) issues. According to Andres Perez, the international finance coordinator at Chile’s Finance Ministry, following ESG criteria “doesn’t destroy value but rather creates value.” Chile joins other state-run funds looking to make sure their investment practices support sustainability and fair treatment of workers. Singapore’s GIC Pte Ltd is investing in renewable energy companies and its compatriot Temasek Holdings Pte is creating an impact investing fund. While Chile’s committee will consider whether it can marry the funds’ strategies with ESG principles, officials are confident that they won’t have to sacrifice investment performance to make the change. (Bloomberg)*