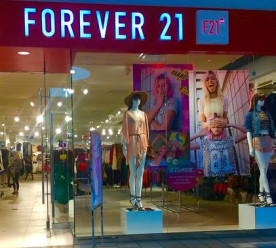 American fast fashion retailer, Forever 21, is facing backlash from customers who have accused the brand of ‘fat-shaming’ by sending diet bars along with online orders. According to customers who shared their disappointment with the brand on Twitter, they received Atkins lemon diet bars as a sample item. Many of the orders, according to social media, were for plus-size items, prompting some customers to question whether the company only includes the sample diet bar in orders for clothes over a certain size. However, other customers have said they have received the diet bar sample with orders for items not included in Forever 21’s plus-size collection. Forever 21 have also been accused of promoting disordered eating and monetising “fatphobia to sell products” by sending the diet bar to customers. In a statement Forever 21 said, “the items in question were included in all online orders, across all sizes and categories, for a limited time and have since been removed” and apologised for their “oversight” on the matter. (Independent)

The decision of Japanese car manufacturer, Nissan, to ignore a UK government request for emissions modifications to thousands of polluting cars has been branded a scandal by environmental campaigners. The Driver and Vehicle Standards Agency (DVSA) discovered that the Sunderland-made diesel Qashqai model emits 17 times more nitrogen oxides (NOx) than EU limits allow. It asked Nissan to retrofit the vehicles to reduce their emissions, as some other manufacturers have, such as Renault and Vauxhall. But Nissan told the DVSA it was “not possible to do a recalibration for existing customers” because it wants “to focus energy and resources on the new models.” A DVSA statement said it found Nissan’s approach “unacceptable.” From 1 September 2019, all new cars sold in the UK will have to meet “real driving emissions” standards that put stringent limits on the amount of nitrogen oxides that can be emitted. Using the new standard, the DVSA tested nine diesel cars and found that older models of the Qashqai breached the limits. (The Guardian)

Machines that remove CO2 directly from the air could cut the cost of meeting global climate goals, but they would need as much as a quarter of global energy supplies in 2100, according to a new scientific study published in Nature Communications. The research is the first to explore the use of direct air capture (DAC) in multiple computer models. It shows that a “massive” and energy-intensive rollout of the technology could cut the cost of limiting warming to 1.5C or 2C above pre-industrial levels. However, the study also highlights the “clear risks” of assuming that DAC will be available at scale, with global temperature goals being breached by up to 0.8C if the technology then fails to deliver. The authors argue that DAC should be seen as a “backstop for challenging abatement” where cutting emissions is too complex or too costly. Steve Oldham, chief executive of DAC start-up, Carbon Engineering, supports the belief that DACs allow reduction in near term mitigation efforts in energy-intensive sectors that are difficult to decarbonise. (Carbon Brief)

British health and beauty retailer, Lush, has unveiled what it claims is the world’s first ‘carbon-positive’ packaging. The new plastic-free pots, which will be used to house Lush’s range of solid shampoos and other ‘naked’ products, are made from biodegradable cork. Lush claims that this material choice means that the packaging’s life-cycle involves the sequestering of more carbon than it emits, because trees used to make the cork are not cut down, with their bark being removed just once per decade. Lush claims that each cork pot sequesters at least one kilogram of CO2e and has stated that it will purchase 500,000 of the pots over the next 12 months. As part of the company’s partnership with green logistics provider New Dawn Traders, the pots arrived at Lush’s UK HQ after a journey by sailboat – a model chosen to minimise the carbon impact of transport – and will be used as part of an upcoming, exclusive range of hair care products. (Edie)*

The Indonesian government plans to burn waste to fuel power plants in four cities on the island of Java this year as part of efforts to tackle the country’s plastic waste crisis. Indonesia is the second-biggest contributor, after China, to the plastic waste that ends up in the oceans and is among a growing number of Asian countries refusing to import waste from developed countries. The Indonesian energy ministry expects to have 12 waste-to-energy plants online by 2022, generating a combined 234 megawatts of electricity by burning 16,000 tons of waste a day. However, a long-standing problem is that the Java-Bali grid that they’ll feed into is already heavily oversupplied, to the extent that the glut in idle energy threatens to damage the country’s finances. Environmentalists are also concerned that burning rubbish to generate electricity isn’t a sustainable solution to the plastic waste crisis and will result in the emission of toxic chemicals such as dioxins, mercury and micro particles. (Eco-Business)