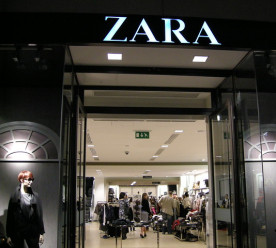 Zara clothes to be made from 100% sustainable fabrics by 2025

The owner of high street fashion chain Zara has announced that all of its collections will be made from 100% sustainable fabrics before 2025. Zara’s parent company, Inditex, has said that its other brands, including Zara Home, Massimo Dutti and Pull&Bear, will also follow suit. The commitment to a more responsible future was made on Tuesday at its annual shareholders’ meeting and makes Zara, which accounts for 70% of Inditex’s group sales, the first international high street store to make such a commitment, reports WWD. It is one of several targets to be announced. By 2025, 80% of the energy consumed in Zara’s headquarters, factories and stores will be from renewable sources and its facilities will produce zero landfill waste, the company said. By 2023, it promised, the viscose used will also be 100% sustainable. However, some, such as the Environmental Audit Committee, Stella McCartney and Fashion Revolution argue that fast fashion can never achieve true sustainability. (The Guardian, edie)

Social media platform Instagram is hiding the number of ‘likes’ on posts in several countries, including Australia and Japan, in order to “remove pressure” on users. The trial which begins Thursday, means Instagram users will no longer be able to see a running total of people who have liked a post, a feature which often gets seen as a measure of popularity. Instead, users will see a user name “and others” that like a post on their feed. Instagrammers can still privately view the number of likes their own posts receive. There is concern social media platforms can contribute to low self-esteem and feelings of inadequacy in young people. Instagram launched a similar trial in Canada in May and the new test is rolling out in Australia, New Zealand, Ireland, Italy, Japan and Brazil. Mia Garlick, Facebook Australia and New Zealand director of policy, said that the aim is to make users feel less judged and to see “whether this change can help people focus less on likes and more on telling their story”. (BBC)

Report: Most big companies fail to report role in deforestation

Most big companies are failing to report the damage their operations are doing to forests despite committing to lighten their footprint under wider efforts to tackle climate change, according to a new report, The Money Trees: The role of corporate action in the fight against deforestation. The report from environmental non-profit CDP states that 70% of 1,500 large companies failed to provide data on their impact on forests in response to its queries last year. Of the 306 companies that did report data, 24% showed no or limited action to reduce deforestation, despite brand damage from being associated with the loss of forests the most frequently cited risk, CDP said. Underscoring the slow progress, trader Cargill said last month that it and the broader food industry would fail to meet a 2020 goal to end deforestation, while pledging to do more to protect forests and native vegetation in Brazil. (Reuters)

Holidaymakers’ responsibility for foul beaches, overcrowding, traffic, aeroplane emissions and other environmental impacts will come under parliamentary scrutiny in the UK. The inquiry into the environmental cost of tourism and transport will consider whether the UK government should play a greater role in offsetting the waste and damage caused by the tens of millions of Britons who go on holiday overseas each year. It will also look at ways to reduce the negative consequences of the growing domestic tourism industry, including the hefty carbon footprint of aviation and cruise companies. The committee will study the industry and report in 2020 on ways to reduce the impacts by using incentives, taxation, offsets and greater scrutiny of corporate claims to provide sustainable or eco-friendly packages. (The Guardian)

Dutch airline KLM has caused an uproar on Twitter after telling a customer it might ask mothers to cover themselves while breastfeeding, if other passengers are offended. “Of course, breastfeeding is permitted on board KLM flights, “However, not all passengers feel comfortable with breastfeeding in their vicinity, and sometimes these passengers complain to the cabin staff,” said a KLM spokeswoman. The spokeswoman said its aim in such cases was to “try to find a solution that is acceptable to everyone and that shows respect for everyone’s comfort and personal space”. “This may involve a request to a mother to cover her breast,” she added. KLM’s response has sparked a flurry of requests from Twitter users asking other airlines about their breastfeeding policies. British Airways told the BBC that it would never look to stop a mother from breastfeeding and would assist in providing privacy if requested. Meanwhile, EasyJet‘s official policy says that it “supports breastfeeding mothers”, and passengers are welcome to feed their babies on board “at any time”. (BBC)

Image Source: Zara – London by Aurelijus Valeiša on Unsplash. Licensed under CC BY 2.0.