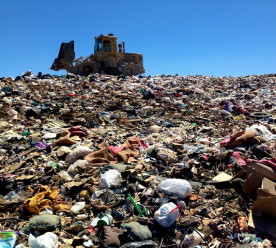 The world produces over two billion tonnes of municipal solid waste every year, enough to fill over 800,000 Olympic sized swimming pools. Per head of population the worst offenders are the US, as Americans produce three times the global average of waste, including plastic and food. When it comes to recycling, America also lags behind other countries, only re-using 35 percent of solid waste. Germany is the most efficient country, recycling 68 percent of material. The study has been compiled by Verisk Maplecroft, a research firm that specialises in global risk. The waste generation index, developed by Verisk Maplecroft, shows per capita rates of municipal solid waste, plastic, food and hazardous materials. In the analysis, US citizens produce 773kg per head of population, roughly 12 percent of the global total. Their output is three times that of their Chinese counterparts and seven times more than people living in Ethiopia. The US is the only developed nation with waste generation that outstrips its ability to recycle. (BBC)

Rising heat due to climate change could lead to the loss of 80 million jobs by 2030, with poor countries worst hit, according to projections by the UN International Labour Organization (ILO). A temperature rise of 1.5C by the end of century could lead to a 2.2 percent drop in working hours—equal to 80 million full-time jobs—costing the global economy $2.4 trillion. The ILO said people would be unable to work due to the health risks posed by higher temperatures. Agricultural workers—especially women, who make up the bulk of the 940 million labourers in the sector—will be most affected, the ILO said, accounting for about 60 percent of all working hours lost due to heat stress by 2030. If global temperatures rise as predicted, the construction industry will account for about 19 percent of lost working hours, with the poorest countries in Southeast Asia and west Africa worst hit. (Thomson Reuters Foundation)

Several hundred environmental activists protested outside Amazon’s headquarters in Paris and at two of its regional distribution centres in France on Tuesday as part of stepped-up climate change demonstrations. The protest drew support from groups including Friends of the Earth and the “Gilets Jaunes”, who have mounted months of demonstrations against President Emmanuel Macron. Some 240 people blocked access to Amazon’s main office in Paris, organisers said, with many denouncing the online giant’s business practices, saying it wasn’t paying its fair share of tax or paying its employees a fair wage. In a statement sent to Reuters, Amazon said it respected the right of protesters to express their opinion, but defended its business practices, saying it paid all the taxes it owed. Organisers said the aim was not to have Amazon shut down in France but to cancel its plans for expansion in 2020. Environmental activists say Amazon needs to do more to limit its environmental impact, including changing a policy of destroying unsold non-food items such as clothes, cosmetics and luxury goods. (Reuters)

Warren Buffett is donating roughly $3.6 billion of Berkshire Hathaway stock to five charities including the Bill & Melinda Gates Foundation, the biggest contribution in Buffett’s plan to give away his fortune. The donation will boost the total amount Buffett has given to the charities to more than $34.5 billion. Four-fifths of the donations go to the Gates Foundation. The rest goes to the Susan Thompson Buffett Foundation, named for Buffett’s late first wife, and charities run by his children: the Howard G Buffett Foundation, the Sherwood Foundation and the NoVo Foundation. Following the latest donation, Buffett will still own about 15.7 percent of Berkshire and have roughly 31 percent of its voting power, despite having given away 45 percent of his 2006 holdings. Buffet and Gates are two of the highest-profile signatories of the Giving Pledge, whose 204 signatories have pledged to give away the majority of their wealth to philanthropic causes. (The Guardian)

The outsourcing company Serco has been fined nearly £23 million as part of a settlement with the UK’s Serious Fraud Office (SFO) over electronic tagging contracts. Serco said its UK subsidiary Serco Geografix had taken responsibility for three offences of fraud and two of false accounting between 2010 and 2013, related to understating profits from its electronic monitoring contracts with the Ministry of Justice (MoJ). In 2013 Serco paid a £70 million settlement to the MoJ after the firm and fellow outsourcing group G4S faced allegations of charging for tagging people who were either dead, in jail, or had left the country. Serco said it had taken “significant steps” to reform itself, including rewriting its system of management control, and strengthening its bidding, contract management, internal audit and management assurance processes. It said no board members or senior executives that were in post at the time of the offences still worked for the company. (The Guardian)