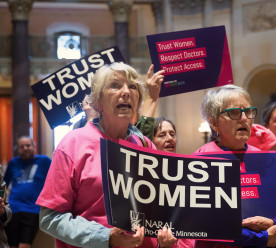 Anti-abortion law and the inconsistent stance of Netflix and Disney

The debate over abortion is raging across the US. Arkansas, Georgia, Kentucky, Ohio and Missouri are among the states which have passed new abortion restrictions. While it is Republican-led state legislatures who have passed laws, there are differences of opinion on both the left and right of the political spectrum.

This deep and divisive issue is seeing companies start to take a position. This month over 200 CEOs signed a letter which was published in the NY Times, claiming that restricting abortion is bad for business. The issue has also started to reveal the inconsistent stance of some of the largest production companies, including Netflix and Disney.

In the state of Georgia, one of the world’s largest hubs for entertainment production employing over 92,000 people, a proposed controversial anti-abortion law has led to a backlash from Hollywood. In March, 50 actors signed an open letter proposing a boycott of film and television production in the state. Production companies have now joined the movement. Netflix, Disney and WarnerMedia, among others, have threatened to boycott the state, by relocating their production operations if the law were to take effect. The entertainment companies citied the need to protect the rights of its female employees. Ted Sarandos, Netflix’s Chief Content Officer, said, “We have many women working on productions in Georgia, whose rights, along with millions of others, will be severely restricted by this law.”

In joining the boycott, production companies are standing by their employees, but they are not necessarily challenging the issue. After all, it is not only Georgia that is planning on implementing restrictive abortion laws. According to the Guttmacher Institute, 28 states are currently considering legislation that would ban abortion in a variety of ways.

What is more, there has been a lack of consistency in the position some production companies are taking. Netflix co-founder and CEO, Reed Hastings, contributed to the campaigns of Republican state lawmakers who approved similarly restrictive abortion legislation in Missouri. Meanwhile, Disney and Netflix continue their productions in Northern Ireland, which also has strict abortion laws. Such inconsistencies raise questions over the authenticity of political stances that companies take.

Image source: Stand up Fight Back Rally at the Minnesota State Capitol Rotunda by Lorie Shaull is licensed under CC BY-SA 2.0