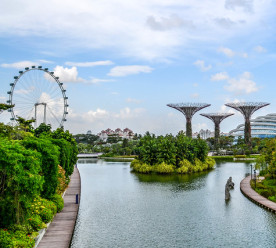 Singapore emerges as one of the most sustainable investment markets globally

Singapore has emerged as one of the most sustainable investment markets in the world, according to research by asset management company, Schroders. However, other ASEAN countries, such as Malaysia, Indonesia and Thailand, were among the least sustainable markets, with companies in these countries having the most negative social and environmental impacts. The research looked at 9,000 companies and ranked the world’s main stock markets according to their overall impact on society, putting a dollar value on their social and environmental impacts. Analysts at Schroders said that companies which face the greatest social and regulatory pressures from governments and regulators tended to deliver the biggest social benefits. According to industry, companies in the water, biotechnology and pharmaceuticals sectors provide the greatest social benefits, whereas gambling companies created the biggest social costs, relative to their importance in stock markets. Andrew Howard, head of sustainable research at Schroders said it is important that investors take into account the social impacts of companies and portfolios instead of relying completely on financial measures. (Business Times)

The UK’s largest defined contribution master trust is giving up on the tobacco industry because it does not think it will be viable in the long term. The National Employment Savings Trust (NEST) has announced it will exclude tobacco from its entire portfolio, a process that it estimated would take up to two years. The auto-enrolment provider’s exposure to tobacco was worth around £40 million. NEST has already excluded tobacco from its ESG emerging markets fund and commodities fund. Sergei Strigo, co-head of emerging markets fixed income at Amundi, the firm behind NEST’s emerging market debt investments, said: “We do not see attractive risk reward of the tobacco sector in the emerging market bond universe and the market share is fairly modest in the emerging market debt space.” Other European pension investors have recently announced decisions to divest from tobacco. Earlier this month Sweden’s AP2 said it was doing so as part of a decision to realign its approach with the World Health Organisation’s Framework Convention on Tobacco Control. (IPE)

HSBC Women in UK Are Paid Bonuses 70% Below Male Staff

Female staff at one of HSBC’s UK units are paid bonuses almost 70 percent lower on average than their male co-workers, but that still represents a significant improvement on a year earlier. The latest gender pay gap report published by the British lender this week showed the shortfall between the discretionary pay-outs to female staff at HSBC narrowing from around 85 percent in 2018. The division reported a pay gap between male and female staff of about 55 percent against 61 percent a year ago. Pay disparity in financial services has been under scrutiny as the stark differences between what women and men earn becomes public. British lawmakers held a discussion this week with representatives of the industry, including HSBC’s group head of human of resources to question their progress in improving conditions for women working in the sector. HSBC said it offered sabbatical leave and flexible working to support staff to be parents or carers, as part of its efforts to recruit and promote women. (Bloomberg)

Tech giant Amazon has been hit with two class action lawsuits that allege the company’s Alexa voice assistant is recording and storing the voices of children without consent. In documents filed for each case, it is alleged that Amazon used its voice assistant Alexa and Echo Dot smart speaker to amass “a vast level of detail about the child’s life, ranging from private questions they have asked Alexa to the products they have used in their home.” The suit argues that when children wake the Echo Dot with their voices “the device records and transmits” user communications without consent to interactions being permanently recorded. Further accusations are made of Amazon building “a massive database of billions of voice recordings containing the private details of millions of Americans” for its own commercial benefit. Last month it was revealed that transcripts of conversations with Alexa and Echo devices continue to be retained by Amazon even after a user deletes their voice recordings from the device. (Fast Company)

Cargill warns goal of halting deforestation will be missed

US-based agricultural commodities trader, Cargill, has warned that global companies will not meet their goal of halting the conversion of forests into farms by next year, dampening optimism for a critical resource to stem climate change. Cargill, along with more than 50 companies, such as McDonald’s, Nestlé and Walmart, endorsed the New York Declaration on Forests in 2014. Their promises at a UN Climate Summit set a goal of “eliminating deforestation from the production of agricultural commodities” such as soybeans, palm oil, paper, and beef by 2020. However, woodlands continue to be destroyed to make room for agriculture. In Brazil, the area under cultivation in the cerrado savannah biome increased 87 percent between 2000 and 2015. Cargill sourced 37.4 percent of its Brazilian soybeans from the cerrado, according to a report published last week. Within the cerrado, 23.1 percent of supplies were grown in municipalities where native vegetation is being converted to farmland at higher rates. (Financial Times)*