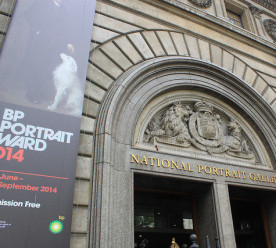 A judge and several leading artists have written to the director of the National Portrait Gallery ahead its annual awards calling on it to end links with oil giant BP. They accuse the central London gallery of helping to launder the oil industry’s image through its BP sponsorship deal and say the oil company is aggravating the climate crisis. In a a letter to the gallery’s director, the judge and artist Gary Hume said, “either we embrace the challenge of decarbonising, or we continue to give legitimacy to BP and its business activities that are seriously exacerbating the problem.” In a separate letter, eight leading artists, who have all been involved with the BP portrait award in the past, have also called for the gallery to remove its ties. The letters are part of a growing campaign against fossil fuel companies’ involvement in the arts, organised in part by the group Culture Unstained. In a statement, BP said: “We support the Paris agreement and are taking action to advance the world’s transition to a low-carbon future”. (The Guardian)

Law firms need to reshape their culture, moving away from “rigid” traditions and “excessive” hours so they can retain more women and attract millennial lawyers, a new study has said. The report, published by alternative legal service Obelisk Support, identifies major problems facing law firms, including a shortage of talent, particularly women. Female lawyers in the UK represent 58 per cent of trainees but just 27 per cent of partners. The report points to law firms’ long hours culture and poor work life balance as the reason many women struggle to become partners — particularly as they combine working with caring for children. The study also found increasing numbers of younger lawyers are abandoning private practice at law firms and switching to working in-house at large companies for the same concerns over work-life balance. Many law firms do not offer information about flexible working during interviews or limit such flexibility to working from home one or two days a week, the study says. (Financial Times*)

Former New York City Mayor Michael Bloomberg has committed to contributing $500 million toward closing coal-fired power plants across the United States. The billionaire philanthropist’s foundation, Bloomberg Philanthropies, said its ‘Beyond Carbon’ initiative would lobby to close about 250 coal-fired power plants by 2030 and make the country fully reliant on clean energy. The donation by Bloomberg was the “largest-ever philanthropic effort to fight the climate crisis”, his philanthropic group said in a statement. The effort to close coal plants, and also halt the production of new natural gas plants, is in collaboration with environmental US non-profit the Sierra Club. The Beyond Carbon initiative will strive to pass clean energy laws and “work to elect state and local candidates who are climate champions”, it said in a statement. Bloomberg added, “We’re in a race against time with climate change, and yet there is virtually no hope of bold federal action on this issue for at least another two years.” (Eco-Business)

One of New Zealand’s largest employers, airline Air New Zealand, will end a ban on staff having visible tattoos, in a move it says will allow staff to express cultural and individual diversity. The airline’s longstanding anti-tattoo policy attracted criticism for cultural insensitivity as it unfairly treated New Zealanders who wished to demonstrate their Maori heritage with tribal tattoos. The airline has also been accused of hypocrisy for using other aspects of Maori culture – such as language and symbols – in its marketing efforts. Air New Zealand Chief Executive Officer, Christopher Luxon, said the firm wanted to embrace diversity and allow employees “to express individuality or cultural heritage”.  The airline said the decision to drop the ban followed research that found one in five adult New Zealanders has at least one tattoo, with more than 35% of people under 30 tattooed. From 1 September, all employees will be able to display “non-offensive” tattoos at work. A spokesperson for the national carrier said it would “treat tattoos like speech” to determine what would be considered offensive. (BBC)

The European food industry’s inability to source commodities that are sustainability produced is fuelling deforestation and driving climate change, according to new data. A new report from Dutch non-profit ISH has found that there is “urgent need” to transition the European food sector to zero-deforestation through pledges to source commodities such as timber, palm oil and soy through sustainable production. The study found that just 37% of soy and 42.5% of tropical timber imports were responsibly sourced in the UK in 2017, although the figures are well above the European averages. The area in which nations are performing best is on sourcing palm oil – a significant driver of deforestation. Across Europe, an average of 75% of palm oil used in food was certified as sustainable. Past research by environmental disclosure non-profit CDP has found that the business community is risking up to $941bn on commodities linked to deforestation, although only 13% of companies responded to a disclosure request making time-bound pledges to zero-deforestation. (Edie)