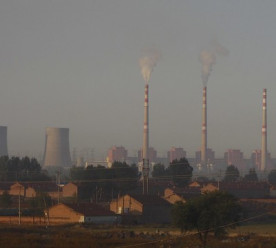 China has publicly accused dozens of firms, including some of its biggest state enterprises, of exceeding pollution limits and breaching monitoring standards. In lists published by the Ministry of Ecology and Environment, subsidiaries of state giants such as China Baowu Steel Group and the Aluminium Corporation of China, were cited and fined for breaching emissions standards among other violations. China has been increasing its supervision capabilities and has added thousands of factories into a real-time emissions monitoring system, but enforcement remains one of its biggest challenges. The ministry has continued to warn that China’s slowing economy had given some regions an excuse to “loosen their grip” on environmental protection. As well as being fined, the companies cited were told to restrict operations until problems were resolved. The biggest fine was to a wastewater treatment plant in Liaoning province, which was ordered to pay 7.2 million yuan. (Reuters)

Unilever-owned ice cream brand, Wall’s, has launched a new digital tool enabling consumers to track how their purchases empower people in its vanilla supply chains in Madagascar. The ‘Track Your Impact’ tool will let customers scan a unique code from their ice cream or ice lolly packaging using their tablet or smartphone. They will then be shown information on how the money raised through their purchase is providing health insurance, education and financial literacy to vanilla farmers and their families. The tool is aimed at engaging consumers with Wall’s’ efforts to champion environmental and social sustainability across its vanilla supply chains in Madagascar, where 80 percent of the world’s vanilla is produced. It will highlight the work Wall’s has done so far with international charity Save the Children and flavour manufacturer Symrise to provide more stable farmer incomes and to champion long-term sustainability across rural farming communities. (Edie)

UK supermarket, Morrisons, will roll out packaging-free fruit and veg across 60 of its UK stores this summer, following a successful trial at three of its stores. Under the scheme, customers are encouraged to bring their own reusable containers, to carry their produce loose or to use a paper bag. The supermarket removed single-use plastic produce bags from its stores last summer, in a move it claims will reduce its annual plastic output by 150 million items annually. Morrisons estimates that the expansion of its “buy bagless” programme will mitigate the use of three tonnes of plastic per week, or 156 tonnes annually. As well as removing plastic bags from produce aisles, the supermarket chain has taken plastic bags off its range of fresh flowers, replacing them with paper alternatives, and is due to make paper bags a permanent fixture at all of its checkouts this year, following another successful trial. The supermarket’s move comes after a 2018 report by Friends of the Earth Europe, Zero Waste Europe, and Rethink Plastic Alliance that found plastic packaging is failing to prevent food waste. (Edie)

Sea level rise could be much larger than expected

A new study by Proceedings of the National Academy of Sciences of the USA (PNAS) has warned the world’s coastal cities to prepare for the possibility of a sea level rise exceeding 2 metres by the end of the century, with “profound consequences for humanity.” The new assessment, that centred on evidence from 22 leading researchers, found runaway carbon emissions and melting ice sheets could result in such a worst-case scenario, potentially double the upper limit outlined by the IPCC’s last major report. By aggregating researchers’ responses on how the Greenland and Antarctic ice sheets might respond to future climate change, the study revealed a one in twenty chance that seas could rise by more than 2 metres by 2100 if unchecked carbon emissions lead to average global warming of 5°C. Around 1.79 million square kilometres of land could be lost and up to 187 million people displaced. “Many small island states, particularly those in the Pacific, will effectively be pretty much inhabitable. We are talking about an existential threat to nation states,” said Jonathan Bamber of the University of Bristol. The IPCC is missing possible serious impacts by not looking at plausible but low probability increases. (New Scientist)

A new report by a group of US National Oceanic and Atmospheric Administration (NOAA) and University of Colorado Boulder scientists, shows that many of the fishing vessels that operate at night in Indonesian waters don’t broadcast their location, masking a potentially widespread problem of illegal and undocumented fishing. Nearly 94 percent of nocturnal lit marine activities in Indonesia don’t use the vessel monitoring system (VMS), which tracks the location and activities of commercial fishing boats, according to the study published in the Remote Sensing journal. While some of this can be attributed to vessels smaller than 30 gross tonnage (GT), which aren’t required under the Indonesian law to use VMS, the authors highlighted boats larger than 30 GT, both Indonesian-flagged and foreign, switched off their tracking devices, likely to avoid detection. According to the researchers, further studies building on these findings could be used to estimate unreported catches and improve stock assessments as well as provide other information relevant for decision-makers. (Eco Business)

Image Source: In China on train 24 by Clay Gilliland on Flickr. CC BY-SA 2.0