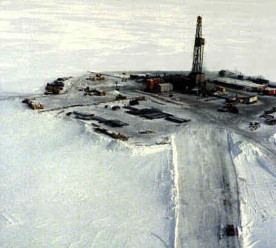 It has been revealed by Greenpeace UK that oil major BP played a key role in lobbying the Trump administration to allow oil and gas drilling in two previously protected areas of the Alaskan Arctic. According to written documents by BP to the Trump Administration, BP lobbied for more areas to be opened up to drilling off the US coast and welcomed plans to lease swathes of the Arctic’s Beaufort Sea for oil and gas exploration. BP also backed the Trump administration’s move to begin oil and gas leasing within a highly sensitive area of Alaska’s Arctic National Wildlife Refuge. Opening up the areas to exploration poses significant risks to the environment and will undermine efforts to meet the Paris climate targets to prevent catastrophic climate change. BP are facing increasing pressure to be more transparent about their climate commitments, as last week leading BP investors holding £10 billion in shares urged the company to set out a business strategy consistent with the goals of the Paris Agreement. This morning, Greenpeace activists have blockaded all entrances to the BP headquarters in London, demanding an end to all new oil and gas exploration. (Unearthed; The Guardian)

The Bank of Italy plans to adopt investment criteria which reward companies that take action on climate change. The criteria will apply by the end of June to the bank’s €8 billion ($8.9 billion) in shareholdings and later be extended to its €1 billion in corporate bond holdings. The criteria exclude firms that do not adopt UN principles on human rights, labour, the environment and anti-corruption. As a result of the new criteria, greenhouse gas emissions from companies within its portfolio will fall 23 percent, and energy and water consumption will drop 30 percent and 17 percent respectively. The Bank of Italy is a member of the Network for Greening the Financial System, a global financial group which treats climate change as a threat to financial stability. The bank will be assisted by an independent adviser to find the best-in-class companies in terms of ESG standards. (Reuters)

Consumer goods giant, Unilever, has unveiled a new pigment which makes black plastics detectable by recycling equipment. Black plastic packaging is not recyclable through kerbside collections in the UK andin most other European nations as its carbon content prevents it from being detected by the infra-red sorting systems used in reprocessing facilities. Aiming to overcome this recycling challenge, Unilever collaborated with RECOUP, WRAP and waste management giants Veolia, SUEZ, Viridor and TOMRA to develop a plastics colouring solution with a lower carbon content. After testing proved that the solution made black plastics detectable in existing recycling plants, Unilever this week confirmed plans to begin switching its TRESemmé and Lynx packaging to the material before the end of 2019. The company claims that the move will divert up to 2,500 tonnes of black plastic from landfill and incineration every year, once the switch is complete. (Edie)

A collaboration between aviation industry companies, Neste, Air BP, and Braathens Regional Airlines, have successfully fuelled a pioneering low-carbon commercial flight across Sweden on Friday. Seventy-two passengers travelling from Halmstad to Stockholm experienced the”perfect flight”, as the aviation industry pooled its expertise to minimise carbon emissions from the one-hour journey. Sustainable aviation fuel produced by oil refining specialist Neste powered the flight, while the plane – Braathens’s Regional Airlines ATR 72-600 turboprop – already produces 40 percent fewer carbon emissions per trip than regional jets, according to the airline. The fuel – which is produced from non-palm sustainable raw materials – produces 80 percent fewer carbon emissions over its lifecycle compared with conventional jet fuel, according to supplier Air BP. In addition, Air BP’s operations at Halmstad City airport have been certified as carbon neutral since 2016. The flight is the latest in a series of milestones as jet fuel suppliers work to deliver new biofuels that can be produced using waste feedstocks. However, the sector faces challenges as it seeks to scale up, including relatively high costs and identifying sufficiently sustainable feedstocks. (Business Green)

Trade unions are lobbying investors to put pressure on global technology company, Amazon, to improve conditions for its workers in the UK. In a meeting at the Trades Union Congress’s (TUC) head office this month, the GMB union raised concerns about employee standards at Amazon to a dozen leading fund managers and pension funds that own stakes in Amazon. These included Legal & General, Baillie Gifford and Aberdeen Standard. The GMB told investors that workers at Amazon’s giant warehouses worked long shifts under pressure to hit targets for items picked, causing pain and injuries. The Amazon worker’s allegations included lack of action on sexual harassment, unsafe working conditions and warehouse managers dismissing employees’ concerns and problems. Amazon refuses to recognise unions and has faced long-running accusations of poor working conditions at warehouses in the UK and the US. A spokesperson for Amazon claims the allegations are false and unsubstantiated. (The Guardian)

Image Source: 2 Alaskaoildrilling by NRDC pix on Flickr. CC BY 2.0