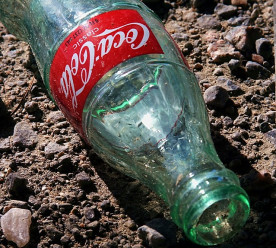 Coca-Cola bottles and cans are the most commonly found items of packaging pollution on British beaches, making up nearly 12 percent of all litter, research by the anti-pollution campaigning group, Surfers Against Sewage (SAS), has found. The results came from a series of 229 beach cleans organised by the campaigning group in April, which found close to 50,000 pieces of waste. About 20,000 of these carried identifiable brands, of which Coca-Cola was the leader, followed by Walkers crisps, Cadbury’s, McDonald’s and Nestlé. The research findings have been submitted to the UK Government, which is considering ways to reduce the littering and packaging pollution problems through the ‘Extended Producer Responsibility’ regulations. Presently, companies must be accountable for their packaging if they have an annual turnover of more than £2 million and handle more than 50 tonnes of packaging a year. However, SAS complains that in practice around 90 percent of the cost of dealing with litter and packaging waste is borne by local authorities. Coca-Cola’s current waste strategy includes a company pledge to recycle one used bottle or can for each sold by 2030, acknowledging the role it plays in the increase in litter on streets, beaches and in oceans. (The Guardian)

The founder of Richer Sounds  is handing control of the hi-fi and TV retail chain to staff. The company will pay its founder, Julian Richer, an initial £9.2 million for the stake but the businessman is giving £3.5 million of that back to staff, who will receive £1,000 for every year they have worked for the retailer. The company’s nine directors are not included, as the bonuses are intended “to thank loyal, hardworking colleagues.” Richer Sounds is one of the biggest UK companies to embrace employee ownership in recent years, with annual sales nearing £200 million. The Employee Ownership Association (EOA) says more than 350 businesses have now adopted the model, with at least 50 more preparing to follow suit. Among its other commitments to employees, Richer Sounds refuses to use zero-hours contracts and is one of only 14 percent of companies with a pay gap that favours women. The company also donates 15 percent of profits to charity. (The Guardian)

Leading BP investors, holding the equivalent of around £10 billion of shares in the oil giant, have urged the company to set out a business strategy consistent with the goals of the Paris Agreement. The 58 investors, acting as part of the Climate Action 100+ initiative, own just under 10 percent of BP voting shares between them, which they claim marks the highest proportion of support yet received for a shareholder resolution calling for climate action at a major corporate. Following engagement with investors, BP’s board has already said it will support the resolution at this year’s annual meeting. The BP resolution calls on the oil firm to participate in containing global average temperature increases to “well below” 2⁰C, and stresses that the Paris Agreement requires a considerable reduction in demand for fossil fuels, as well as investment to help shift its production. Steve Waygood, chief responsible investment officer at Aviva Investors – one of the shareholders backing the action – said BP’s support for the resolution “demonstrates how the investment industry can collaborate to instigate meaningful change”. (Business Green)

Swedish automobile manufacturer, Volvo Cars, has signed a multibillion-dollar deal to buy electric car batteries from two leading Asian manufacturers to supply the company until 2028. The deal with Chinese battery manufacturer Contemporary Amperex Technology (CATL) and South Korean chemical group LG Chem, is the latest by a carmaker to secure battery supplies into the future. Volvo wants half of its sales to be fully electric by 2025, which combined with its growth forecasts, mean it would sell about 500,000 battery cars a year by the middle of the next decade. Global carmakers are hurrying to secure battery supplies to support the planned increase in electric car sales as they face growing demand for the vehicles, and tighter emissions rules across the world. The number of high-quality large battery supplies are limited, with CATL, LG Chem, Samsung SDI and Panasonic the largest providers globally. (Financial Times)*

Anglo-French investment bank, Rothschild & Co, has decided not to advise multinational conglomerate, Adani Group, in the financing or development of the $4 billion Carmichael coal mine in Queensland, Australia. The bank is also not advising the firm on the planned sale of stake in the Abbot Point coal export terminal, according to a confidential letter to environmental group, Friends of the Earth. The decision comes as banks and other financial institutions are facing increasing pressure to cut investments in heavily-polluting coal, , as part of the move to a low-carbon economy . The Carmichael coal mine, which has been in planning since 2010, has become a key issue for debate on climate change ahead of Australia’s upcoming May election. Friends of the Earth said in a statement that the decision by Rothschild came after several requests from Friends of the Earth and partner organizations. (Reuters)