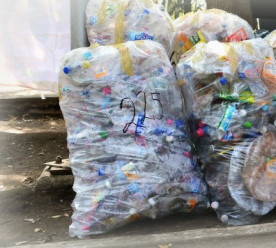 European Commission President Jean-Claude Juncker has said that the EU should “concentrate on immediate and urgent” climate policies for 2030 rather than a proposed 2050 target to reach net-zero emissions. Speaking to reporters at the end of an informal summit in Romania, Juncker stated that although he agreed with the proposed 2050 target, the 2030 target remained an immediate and urgent action. He added that countries must “not try to escape from responsibilities by fixing a target a long time after the active time spent in politics.” The current 2030 goal is a 40 percent emissions reduction benchmark, which analysis has shown should be exceeded by at least 5 percent. In November, the EU executive presented its draft 2050 climate plan, intended to make the EU economy compliant in the long run with the bloc’s Paris Agreement commitments. The most ambitious scenario, a net-zero pathway, is currently explicitly supported by France, the Netherlands, Denmark, Sweden, Spain, Belgium, Luxembourg and Portugal. (Edie)

A group of indigenous people will file an unprecedented legal complaint against Australia on Monday, accusing the government of breaching their human rights by falling short on its Paris climate accord pledges. Eight residents of the Torres Strait Islands, a group of more than 270 low-lying islands between Australia and Papua New Guinea, are set to lodge a complaint with the United Nations Human Rights Committee in Geneva, Switzerland. The UN complaint, which lawyers said could take up to three years to be ruled on, would be the first climate change litigation brought against the Australian federal government based on human rights, said environmental campaign group ClientEarth, which is involved in the action. The complaint argues that Australia lacks adequate policies to cut its emissions, contributing to rising sea levels that are already threatening homes and damaging burial grounds and sacred cultural sites on the islands. While Australia would not be forced to comply with the UN panel’s ruling, lawyers say any decision in favour of the islanders would be a moral and political victory. (Thomson Reuters Foundation)

Cigarette maker Philip Morris International Inc has suspended a global social media marketing campaign in response to Reuters inquiries into the company’s use of young online personalities to sell its new “heated tobacco” device, including a 21-year-old woman in Russia. The company’s internal “marketing standards” prohibit it from promoting tobacco products with youth-oriented celebrities or “models who are or appear to be under the age of 25.” Philip Morris has since launched an internal investigation into marketing posts and photographs. These posts include a paid post advertising the IQOS tobacco product by social media “influencer” Alina Tapilina in Moscow – who listed her age as 21 on photo-sharing site Instagram. The company told Reuters that they have now suspended all product-related digital influencer actions globally. In a statement, Philip Morris said its suspension of the social marketing campaign is “concrete proof” of its “conviction to achieve a smoke-free world through socially responsible practices.” However, Matthew Myers, president of The Campaign for Tobacco-Free Kids, has suggested that Philip Morris “is changing their behaviour only when caught red-handed.” (Reuters)

Almost all the world’s countries have agreed on a deal aimed at restricting shipments of hard-to-recycle plastic waste to poorer countries, the UN announced on Friday. Exporting countries – including the US – now will have to obtain consent from countries receiving contaminated, mixed or unrecyclable plastic waste. Currently, the US and other countries can send lower-quality plastic waste to private entities in developing countries without getting approval from their governments. Since China stopped accepting recycling from the US, activists say they have observed plastic waste piling up in developing countries. The pact comes in an amendment to the Basel Convention. The US is not a party to the Convention so it did not have a vote, but attendees at the meeting said America argued against the change, saying officials didn’t understand the repercussions it would have on the plastic waste trade. Rolph Payet of the United Nations Environment Program called the agreement – signed by 187 countries – “historic”, because countries will have to monitor where plastic waste goes when it leaves their borders. The pact comes after a report published last month by the Global Alliance for Incinerator Alternatives and Greenpeace East Asia, showed dumped plastic waste in Asia was destroying crops and health. (Edie)

Oil giant, Eni SpA, is to offset emissions from its oil and gas operations by working with African communities to prevent deforestation. The project is part of the Italian company’s goal of removing the equivalent of 20 million tons a year of carbon dioxide from the atmosphere by 2030. On top of efforts to improve operational efficiency and minimize waste, the forest initiative would result in net zero emissions from its upstream fossil fuels business, Eni says. While Eni’s initiative will involve planting some new trees, the focus is on preserving mature forests, “which play a crucial role to absorb CO2 from the atmosphere,” the company said. It will develop forestry projects through REDD+, a program to reduce emissions stemming from deforestation or forest degradation. The company has formed partnerships with Zambia, Mozambique, Zimbabwe, Mexico and Brazil. Talks are also underway to develop new initiatives in Congo, Indonesia, Mozambique and Ghana. (Bloomberg)*