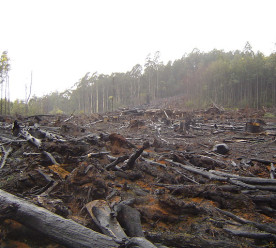 Scores of European and American companies, including some of the world’s biggest banks and investment groups, have been accused of aiding the environmental destruction of the Amazon in a new report. From asset manager BlackRock to agribusiness giant Bunge, researchers have cited a host of the world’s most powerful companies for either allegedly financing or buying from groups that have been implicated in the destruction and deforestation of the Amazon rainforest. The findings released by US environmental group, Amazon Watch, come amid an escalating public outcry about climate change as deteriorating weather patterns imperil communities worldwide. Foreign investors have enormous influence over what happens in the Brazilian Amazon. In particular, big banks and large investment companies play a critical role, providing billions of dollars in lending, underwriting and equity investment to soy and cattle companies that cause deforestation. BlackRock responded by saying, “we do not own the assets our clients invest in… we endeavour to offer them a wide range of investment options, including sustainable investments.” (Financial Times)*

JPMorgan bans staff from Brunei-owned hotels over laws against homosexuality

Global financial services firm, JPMorgan Chase, has banned its staff from staying in any of a dozen hotels owned by the Sultan of Brunei, joining a backlash against the Asian kingdom that has enacted death by stoning as a punishment for gay or extramarital sex. It puts luxury retreats, including London’s Dorchester and the Beverly Hills Hotel in Los Angeles, off limits to executives at America’s biggest bank. The decision follows a similar move by Deutsche Bank, days after the law took effect in Brunei at the beginning of April. There have been global calls for a boycott of Brunei-owned luxury hotels, including a pledge from Los Angeles city leaders to implement formal measures to discourage tourism at the resorts. A JPMorgan spokesperson confirmed that the move to ban Brunei hotels from their booking system was a reaction to the new law, which also authorises amputation of the limbs of convicted thieves and sanctions certain forms of black magic with the death penalty. (Financial Times)*

Worker activists at global tech company Google held a meeting on Friday where they alleged that the company retaliates against employees who speak out about workplace problems and announced plans for a “company-wide day of action” on 1st May. The meeting, livestreamed for Google employees in offices around the world, was announced after two of the organizers of the November 2018 global walkout circulated a letter internally alleging they were being punished for their activism. Their statements, along with anonymous reports of retaliation of 11 other Google employees, were published in internal documents seen by the Guardian. The group subsequently published an internal document with a new set of demands, including a “transparent, open investigation of HR and its abysmal handling of employee complaints relating to working conditions, discrimination, harassment and retaliation”. Friday’s meeting is the latest manifestation of employee discontent at Google, which has faced worker-led protests over issues ranging from the ethics of performing work for the US Department of Defence to the handling of sexual harassment claims and expansive use of subcontracted workers. (The Guardian)

The US Justice Department has opened a criminal investigation into American automaker’s, Ford Motor Co, emissions certification process in the United States. Ford says it is cooperating fully with the probe and conducting its own internal review. The criminal investigation makes the automaker the latest to come under scrutiny for adherence to emissions standards by U.S. officials. Ford potentially faces significant financial penalties as regulators have taken a tough line on emissions issues. Ford disclosed an issue with emissions to the Environmental Protection Agency and the California Air Resources Board in February. The company also hired law firm Sidley Austin and experts to investigate its vehicle fuel economy and testing procedures after employees raised concerns about analytical modelling that is part of its fuel economy and emissions compliance process. US and California regulators have been cracking down on automakers for emissions cheating following revelations in 2015 that German automaker Volkswagen AG had used defeat devices to make models equipped with diesel engines appear to comply with emissions standards when they emitted far more pollution than allowed in real-world driving. (Reuters)

Oil companies will cease to be attractive investments unless they quickly adopt low carbon business models that support the Paris Agreement’s climate targets, new findings suggest. This was the result of a survey of 39 fund managers responsible for $10.2 trillion of assets worldwide, carried out by the UK Sustainable Investment and finance Association (UKSIF) and charity the Climate Change Coalition. In total, 86 percent of respondents called on oil firms to align their businesses with the Paris Agreement’s goals, with nearly half calling to policies consistent with a 1.5⁰C global warming pathway, while the remaining 43 percent called for a 2⁰C target. A number of leading oil majors have recently unveiled plans to step up clean energy investment and develop strategies that are compatible with the Paris Agreement. However, critics have argued the promised strategies look like they will be narrowly focused on emissions from their direct operations and will largely ignore emissions from the fuels oil majors provide, meaning they will still be exposed to ‘stranded asset’ risks as economies decarbonise. (Business Green)

Image Source:  Deforestation by crustmania on Flickr. CC BY 2.0