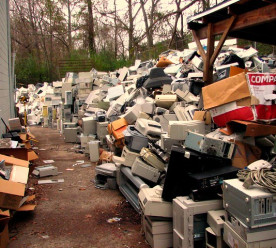 An industry body representing 900 UK technology companies techUK has called on the UK Government to implement tighter regulation of e-waste exports under its Resources and Waste Strategy, after a landmark study into the impacts of Europe’s e-waste crimes on human food chains in Africa. Carried out by anti-toxic chemical pollution bodies IPEN and the Basel Action Network (BAN), the study analysed the levels of brominated and chlorinated dioxins in food products intended for human consumption and produced in Ghana’s slums, where large amounts of illegally exported e-waste streams from Europe are sent. The study found that eggs laid by chickens allowed to roam the area exceeded the European Food Safety Authority’s (EFSA) tolerable daily intake for chlorinated dioxins by 220-fold. Such chemicals are considered highly toxic and carcinogenic. According to IPEN and BAN, this contamination is primarily caused by people breaking apart discarded electronics to recover metals or burning the plastic components off such devices. The study calls on European nations to adopt policies which bind them, by law, to prevent the release or creation of pesticides, industrial chemicals and other toxic by-products from products and waste they export. (Edie)

American auto giant, Ford, is expanding its electric vehicle (EV) plans with a $500 million investment in the US EV developer, Rivian, as part of a new strategic partnership. Rivian is one of a number of new entrants to the auto sector entirely focused on zero emission technologies. It specialises in the development of off-road capable vehicles, such as SUVs and Pickup trucks, and is viewed as a potential challenger to established EV brands such as Tesla. Under the terms of the new deal, which is subject to regulatory approval, Ford will invest $500 million in return for an undisclosed minority stake in the company.  The investment represents a big opportunity for Rivian as it prepares to deliver its first two vehicles in late 2020. The deal should also further strengthen Ford’s high-profile plans to invest up to $11 billion in EV development in the coming years as it seeks to rapidly expand its line-up of green cars and trucks. (Business Green)

Britain’s anti-slavery helpline recorded a surge in calls, cases and suspected victims last year, but few referrals to the anti-slavery agency triggered investigations into labour abuse. The hotline identified more than 7,100 potential victims and about 1,850 modern slavery cases last year – both up by almost half on 2017 – said Unseen, the charity that runs the service. Labour abuse accounted for 54 percent of cases recorded by the hotline. Car washes, beauty and spa facilities, construction sites, hospitality and agriculture were the main centres of suspected modern slavery. Yet, only about 10 of 320 possible labour abuse cases across these five sectors referred by Unseen to Britain’s anti-slavery agency led to investigations, with just one resulting in arrest. Justine Currell, executive director of Unseen, said the charity was slowly “getting better traction” with law enforcement referrals and resulting action. However, as the number of slaves recorded by the government rises and convictions rates stall, activists and academics have questioned Britain’s claim to be a world leader in the anti-slavery drive. (Thomson Reuters Foundation)

Six years after the Rana Plaza disaster, garment workers in Bangladesh face lower wages and exploitation as fashion brands have failed to compensate factories for safety improvements, labour leaders said on Wednesday. The 2013 Rana Plaza factory collapse killed more than 1,100 workers, placing scrutiny on major brands and sparking demands for better safety in the world’s second-largest exporter of ready-made garments. Yet, a new report by Human Rights Watch (HRW) said fashion companies constantly pressure Bangladeshi garment suppliers to keep prices low and make clothing faster, resulting in cost-cutting on safety and wages, and the mistreatment of workers. Two agreements after the Rana Plaza disaster saw retailers involved in initiatives to improve conditions in factories: the Bangladesh Accord – signed by about 200 major brands and unions – and an alliance on worker safety. However, many of Bangladesh’s factory owners said that brands had not covered the cost of the safety improvements they had made. Furthermore, the HRW report comes at a time when the Bangladesh Supreme Court is considering an appeal by the Accord against a ruling last year which ordered it to be shut down. (Reuters)

The implementation of the UK’s new Environment Principles and Governance Bill would lead to key national environmental policies becoming “severely downgraded” from those currently mandated by the EU, MPs on the Environmental Audit Committee (EAC) have warned. The EAC’s scrutiny of the Government’s Draft Environment Bill claims that the document is “lacking coherence” and leaves “many Governmental departments exempt” from environmental responsibilities. Specifically, the Committee is concerned that the Bill in its current form would allow the Secretary of State to exclude policies considered “not relevant” or with “no significant environmental benefit.” The policy framework also excludes select landowners from taking environmental responsibilities, which would exempt the Ministry of Defence from the scrutiny of the UK’s new post-Brexit green watchdog, the Office for Environmental Protection. The EAC’s scrutiny was published after a four-month inquiry period which saw the Committee receive evidence from green bodies and industry experts, including the Environment Agency, WWF, the Institute of Environmental Management and Assessment and Natural England, Energy UK, Oil & Gas UK, Thames Water and Anglian Water Services. (Edie)

Image Source: e-Waste by Curtis Palmer on Flickr. CC BY 2.0.