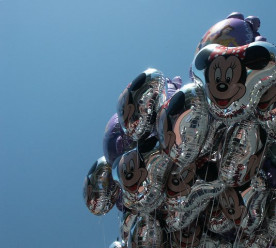 The granddaughter of Disney’s co-founder has escalated her campaign against excessive boardroom pay at the company. Abigail Disney argues top executive bonuses should be halved with the excess money given to its lowliest paid workers. The heiress and documentary film-maker, who in a string of tweets on Sunday said the $65.7m Disney CEO Bob Iger earned last year was “insane”, wrote in an editorial published by the Washington Post that Walt Disney should cut boardroom pay to “help rebuild the American middle class”. Disney could set aside half of its executive bonus pool to give the bottom decile of workers an extra $2,000, Ms Disney claimed. She said this would double the reward that 125,000 of Disney’s rank and file employees received last year, when they earned a bonus of $1,000 each. Mr Iger’s total compensation last year was 1,424 times the median salary of a Disney worker, she said. Disney has responded to the criticisms by saying that it had “made historic investments” in employee earnings, including a starting hourly wage of $15 at Disneyland and a $150m initiative to pay for hourly workers’ college educations. (Financial Times*)

New York City and Washington state respectively released a city-wide “Green New Deal” and clean power bill on Monday. New York mayor Bill de Blasio unveiled a raft of proposals in a bid to cut greenhouse gas emissions by nearly 30 per cent by 2030, the deadline set by UN scientists to limit warming to 1.5C. The $14bn programme, dubbed “OneNYC 2050”, sets out to achieve carbon neutrality and 100 per cent clean energy by 2050 by modernising the city’s buildings, transport, and boosting clean energy. In a global first, New York City will be ordering all existing buildings of 25,000 square feet or more, of which there are 50,000 across the city, to carry out energy upgrades in a bid to slash their emissions. Buildings account for 70 per cent of the city’s carbon pollution. The plan bans inefficient all-glass constructions, many of which have defined the city’s iconic skyline. In Washington, the state senate passed its own clean legislation, requiring 100 per cent of the state’s electricity to be carbon-neutral by 2030 and carbon-free by 2045. The bill, which has already passed the house, also requires state utilities to phase out coal power by 2025. (Business Green)

Norwegian oil and gas company Equinor will revise its climate targets next year and assess its investments against U.N.-backed goals following talks with major investors. Equinor revealed the new steps on Wednesday after talks with a group of more than 320 investors, led by UBS Asset Management, HSBC Global Asset Management and Storebrand Asset Management, which together manage more than $33 trillion in assets. Among the changes, Equinor will review its existing climate-related targets to 2030 and set out new targets for after 2030, linking them with remuneration of executives and employees. From 2020, it will also report on the overall, estimated carbon intensity of its products and services. Starting from this year, Equinor also said it would look to ensure all material capital investments align with efforts to keep any increase in global temperatures to below 2C. In March, Shell announced plans to reduce carbon emissions from its oil and gas operations and product sales by 2 percent to 3 percent during the 2016-2021 period, the first oil company to do so. (Reuters)

Fashion brand H&M has become the first major retailer to list individual supplier details for each garment on its website to increase transparency in an industry with high risks of slavery and labour abuses. The Sweden-based multinational’s move was hailed by workers rights groups who said it was a step forward, but added that the data may not be particularly meaningful to shoppers without additional information to put it into context. A growing number of big brands, from sportswear giant Adidas to fashion retailer ASOS, are sharing information about their complex supply chains amid mounting regulatory and consumer pressure on companies to ensure their products are slavery-free. However, H&M is the first major fashion chain to list supplier details for each individual garment. Online shoppers can see where clothing was made, including the production country, supplier and factory names and addresses as well as the number of factory workers. The brand’s app can be used to access the same data for clothing in stores by scanning an item’s label. This week marks six years since Bangladesh’s Rana Plaza factory collapsed, in a disaster that killed about 1,100 people and increased awareness of the risks faced by many garment workers. (Eco-Business)

A report by Inclusive Development International, Bank Information Centre Europe and Jakarta-based coal watchdog JATAM, has revealed that the World Bank’s private-sector arm, the International Finance Corporation (IFC), financed commercial banks and private equity funds that then invested in six coal companies in Indonesia. Collectively, these companies dug up 227 million tons of coal in 2017; if all of it were fed into power plants, it would generate 458 million tons of carbon dioxide emissions — higher than Brazil’s emissions, and equivalent to 12th place on the list of top emitting countries. The report was released during a policy forum in advance of the World Bank’s 2019 Spring Meetings in Washington, D.C. The multilateral lender pledged in 2013 to end direct financing for coal. The IFC had recently unveiled a draft plan, called the “Green Equity Strategy”, with the aim of forcing client banks to commit to not financing coal projects and shifting their financing toward green energy. However, the new report detected loopholes in the strategy, such as a loose definition of what constitutes “coal exposure”. (Eco-Business)

Image source: Disney by arjun mehta on Flickr. CC BY 2.0.