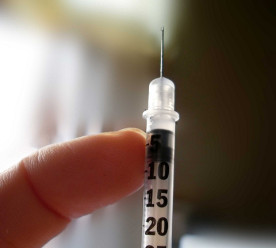 Drug maker Eli Lilly & Co. will offer a half-priced version of its insulin, becoming one of the first companies to effectively cut the price of a top-selling drug amid the ongoing U.S. debate over pharmaceutical costs. While it will continue selling its brand-name version at the existing price, Indianapolis-based Lilly will also sell a half-cost “authorized generic” giving a better deal to customers who pay cash, or who are in insurance plans that make them pay a percentage of a drug’s list price. Insurers and PBMs don’t typically pay the listed prices for drugs, and instead negotiate discounts and rebates that can help lower premiums as a whole, but can result in large out-of-pocket costs for some patients on costly medicine or who have chronic conditions that force them to take treatments year-round. Lilly’s move is one of the first by a major drug maker to offer a cut-price version of a major product, and could put pressure on other pharmaceutical companies to do the same. (Bloomberg)

The Principles for Responsible Investment (PRI) has launched a project to address “fundamental legal questions” surrounding the consideration of investing activity’s impact on sustainability. The PRI is collaborating with the United Nations Environment Programme Finance Initiative and The Generation Foundation on the project, dubbed ‘A Legal Framework for Impact’. The PRI said investors were increasingly considering “impact duties” such as decarbonisation targets, gender equality, or the impact of their investments on wider society. However, fundamental legal questions remained, including whether investors were legally required to integrate the sustainability impact of their investment activity in their decision-making processes, or whether there were any legal impediments to investors adopting “impact targets”. This project would involve preparing and publishing legal analysis as well as practical recommendations for investors seeking to make “sustainability impact” a core part of their activity. (IPE)

The European Union agreed on Thursday on a new law that forces asset managers, insurers and pension funds to disclose environmental risks in their investments. The law is meant to spur green investment and to curb “greenwashing”, a practice whereby companies claim to be more environmentally friendly than they really are. The agreement reached by EU governments and EU lawmakers will also introduce transparency requirements on the social consequences of investment decisions. The new rules are part of a package of measures meant to help the EU to achieve its targets in countering global warming, for which the commission has estimated that €180 billion a year in additional investment will be needed for the next two decades. As part of this package, EU states and lawmakers are also negotiating a legal text to establish a unified EU classification system of sustainable economic activities which would set out the criteria for labelling investments as “green”. (Reuters)

Gender pay reporting may start in weeks across corporate America

Companies with more than 100 employees will have to report to the U.S. government data about how much workers’ are paid broken down by sex, race and ethnicity, possibly as soon as this spring, according to a new court ruling. While the pay disclosures were finalized in the summer of 2016, the Office of Management and Budget (OMB) froze the expanded requirements after President Trump took office. The National Women’s Law Centre and other groups sued, and on March 4, Judge Tanya Chutkan ruled in their favour, saying that the government didn’t properly justify its decision. The OMB could appeal, and it’s not clear whether companies will have to comply by the original deadline of May 31. The court decision comes amid a rising global push to get companies to show that their pay practices are fair. Under shareholder pressure, most of the big U.S. banks last year released modified information on the gender pay gaps in their workforce. The U.K.’s new gender pay gap reporting requirements are entering their second year. (Bloomberg)

Honda to only sell electric vehicles in Europe by 2025

Japanese car manufacturer Honda has launched ambitious plans to only sell vehicles using electric powertrains in Europe within six years, which will be complemented by new energy management partnerships. The firm made the announcement at the Geneva Motor Show, where its senior vice president for Europe, Tom Gardner, said it was making the move alongside its overall global shift to electrification by 2030, which will see Honda produce two-thirds of total sales from electric vehicles (EVs) by this time. Gardner said the shift to electrification “has gathered pace considerably”, describing technological changes as “unrelenting” with customers also shifting their view on EVs. It came as the firm also unveiled its latest electric model, the e Prototype, that the company claims will have a range of more than 200km, as well as a fast-charge functionality that provides 80 percent range in 30 minutes. It hopes to move towards a production model by the end of 2019. (Edie)