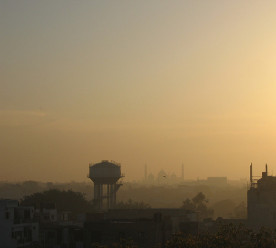 New Delhi is world’s most polluted capital, according to research

New Delhi was the world’s most polluted capital city in 2018, two groups monitoring air pollution said on Tuesday in a study of the amount of fine particulate matter known as PM2.5 in 61 capital cities around the world. The Indian capital, home to more than 20 million people, was followed by the Bangladesh capital of Dhaka and Kabul, capital of Afghanistan, according to the study by IQ AirVisual, a Swiss-based group that gathers air-quality data globally, and Greenpeace. New Delhi’s toxic air is caused by vehicle and industrial emissions, dust from building sites, smoke from the burning of rubbish and crop residue in nearby fields. The city’s average annual concentration of PM2.5 in a cubic meter of air was 113.5 in 2018, the groups said in their report, more than double the level of Beijing, which averaged 50.9 during the year, making it the eighth most polluted in the world. “The question which remains to be answered is whether there is enough political will to aggressively fight the health emergency India faces today and move away from polluting fuels and practices,” said Pujarini Sen, spokeswoman for Greenpeace India. (Reuters)

Former New York City mayor Michael Bloomberg announced that he will not run for president, but instead launch a campaign to rid the United States of fossil fuels as quickly as possible. Explaining his reasoning on his news network’s opinion page, Bloomberg said the climate crisis was too urgent to be bogged down by political feuding. Bloomberg calls this latest effort Beyond Carbon, and it is an outgrowth of an ongoing Sierra Club campaign called Beyond Coal. Bloomberg, who owns Bloomberg LP, funded the Beyond Coal campaign and says he hopes that the campaign will help shut down all coal-fired plants in the country in the next 11 years. The announcement dismisses previous speculations that the former mayor would run for president. Bloomberg explained that he thinks the best way he can help the country is to throw his political capital behind a push to move the country “toward a 100 percent clean energy economy” and away from natural gas, oil, and coal. (The Verge)

Mondelez turns to satellite mapping in fight against deforestation

Mondelez International, owner of Oreo and Cadbury’s Dairy Milk, has pledged to map all farms covered by its sustainability scheme using satellite technology by the end of 2019, as it strives to eliminate deforestation from its key sourcing regions. The commitment will see farms across the company’s three largest cocoa-sourcing markets – Ghana, the Ivory Coast and Indonesia – regularly monitored for forest loss using digital mapping technology. The satellites use Synthetic Aperture Radar (SAR) to “look” through the clouds and monitor the earth continuously. Farmers found to be driving deforestation under the mapping scheme will receive additional education and support to conserve or reforest their local environments. If they fail to heed this advice, they risk being removed from Modelez’s supplier list. The satellite mapping scheme forms an extension to Mondelez’s Cocoa Life programme, which has a headline aim of bringing fair wages and sustainable agriculture training to 200,000 farmers across six countries by 2022. It will apply to all farmers taking part in the initiative, which Mondelez hopes to eventually expand to cover 100% of its global supply chains. (Edie)

Global conservation charity WWF has been accused of funding and working with anti-poaching guards who allegedly tortured and killed people in national parks in Asia and Africa. It says it is commissioning an independent review into the allegations made as a result of the investigation by internet news site BuzzFeed. The probe alleges its “war on poaching” is causing civilian casualties. Indigenous people and villagers have been shot, beaten unconscious, sexually assaulted, and whipped by armed guards in parks in places like Nepal and Cameroon, BuzzFeed alleges. WWF funds, equips and works with these guards, the report says, accusing some staff of turning a blind eye to abuses. It also links WWF staff to a deal to buy assault rifles in the Central African Republic in 2009, against its own policies. BuzzFeed said it carried out a year-long investigation in six countries, based on more than 100 interviews and thousands of pages of documents, including confidential memos, internal budgets, and emails discussing weapons purchases. (BBC)

Women made up less than 18 percent of private equity employees as of February, a figure that’s unchanged since October 2017, according to a report last week from data provider Preqin. That proportion is lower than any other asset class they measured, including venture capital, hedge funds, private debt, real estate, infrastructure and natural resources. The figures are slightly better at senior levels, with women occupying 9.9 percent of the top roles at private equity firms, up from 9.4 percent in 2018. The report also found that Asia is the only region where more than one in ten senior employees at private equity firms are women. In January, one of buyout firm Permira’s few female partners announced her decision to retire at the end of the year after two decades at the company. In an interview at the time, she talked about how isolating being the only woman in the room can be. “Getting more women in the industry is a good thing,” Cheryl Potter said in an interview. “Diverse teams drive better decision making.” (Bloomberg)