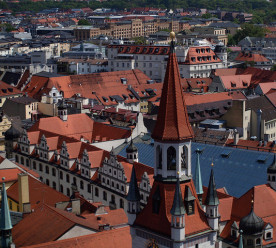 Facebook Inc. is endowing a new institute devoted to the ethics of artificial intelligence at the Technical University of Munich, in Germany. The new center, which Facebook is funding with an initial grant of $7.5 million over five years, will investigate issues around AI safety, fairness, privacy and transparency, Joaquin Quinonero Candela, Facebook’s director of applied machine learning, said in a blog post. “At Facebook, ensuring responsible and thoughtful use of AI is foundational to everything we do — from the data labels we use, to the individual algorithms we build, to the systems they are a part of,” Candela said. Sunday’s announcement marks the first time Facebook has funded an academic institute devoted to these issues. Previously, Facebook has joined the Partnership for AI, a consortium that includes a number of companies working at the cutting edge of AI technology and that aims to address ethical and safety concerns. (Bloomberg)

Pessimism among chief executives has risen sharply in the past 12 months as the leaders of the world’s biggest companies have taken fright at rising protectionism and the deteriorating relationship between the US and China. The survey of chief executives conducted by the consultancy firm PwC to mark the start of the World Economic Forum in Davos showed a sixfold increase to 30 percent in the number of CEOs expecting global growth to slow during 2019. The survey showed that the most pronounced shift was among CEOs in North America, where optimism about global growth dropped from 63 percent in 2018 to 37 percent. PwC said this was probably due to the fading impact of Trump’s tax cuts and emerging trade tensions. While the US retained its position as the top international market for growth over the next year, many CEOs have been turning to other markets, PwC said. (Guardian)

A new report released today at the World Economic Forum meeting has outlined the urgent need for nations to “wake up to the potential” of the circular economy in order to push the world towards the Paris Agreement’s ambitious pathway. The Circularity Gap Report 2019 has been released today by non-profit Circle Economy, which consists of a member community of businesses including Arup, ING and VF Corp. The report notes that less than 10% of the 92.8 billion tonnes of material extracted for use is reused annually. With global material use more than tripling since the 1970s – and set to double again by 2050 – Circle Economy is advising governments to rethink approaches to resource use in select sectors. The report praises the Netherlands for setting a target of becoming 50% circular by 2030 and 100% by 2050, but notes that most governments are failing to impose ambitious new policies that promote circularity, curb emissions, reduce social inequality and foster low-carbon growth. (Edie)

Apple, L’Oréal and Mitsubishi Electric are among more than 120 global firms which scored top marks in a ranking of corporate efforts to slow climate change. London-based CDP, formerly the Carbon Disclosure Project, said its data showed the shares of its index leaders tend to outperform on stock markets. CDP said the STOXX Global Climate Leaders index, based on the CDP A List, outperformed the STOXX Global 1800 of major firms by 5.4 percent a year from December 2011 to July 2018. Companies are coming under increasing pressure from shareholders to address climate change. But only two percent of 6,800 firms that submitted data made the “A List” of CDP’s index, including Johnson & Johnson, Nestlé, China Mobile and Microsoft. Among examples of efforts made by its A List companies, CDP said Danish toy-maker LEGO launched the first LEGO elements made from plant-based plastic sourced from sugar cane. (Reuters)

Black Britons and those of south Asian origin face “shocking” discrimination in the labour market at levels unchanged since the late 1960s, research has found. A study by experts based at the Centre for Social Investigation at Nuffield College, University of Oxford, found applicants from minority ethnic backgrounds had to send 80 percent more applications to get a positive response from an employer than a white person of British origin. A linked study by the same researchers, comparing their results with similar field experiments dating back to 1969, found discrimination against black Britons and those of south Asian origin – particularly Pakistanis – unchanged over almost 50 years. The research, part of a larger cross-national project funded by the European Union and shared exclusively with the Guardian before its official launch, prompted concerns that race relations legislation had failed. (Guardian)

Image source:Munich, Germany by Alejandro on Flickr. CC BY 2.0.