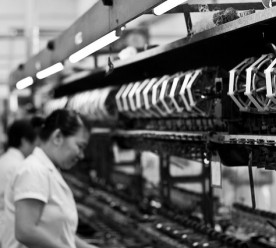 Only 8 percent of Hollywood’s top films in 2018 were directed by women, despite high-profile efforts to improve gender equality. The percentage is roughly unchanged from two decades ago, according to an annual study, which found a “radical under representation” of women in the industry. Allegations of sexual harassment in Hollywood became public in late 2017, prompting calls for more women at all levels of the entertainment business. In 2018, women accounted for just 8 percent of directors of the 250 highest-grossing Hollywood films, less than the 9 percent in 1998. Women were most represented as producers, making up 26 percent of the total. “The study provides no evidence that the mainstream film industry has experienced the profound positive shift predicted by so many industry observers over the last year,” study author Martha Lauzen, executive director of San Diego State University’s Center for the Study of Women in Television and Film, said in a statement. (Guardian; Reuters)

Companies’ and investors’ risk aversion is preventing a reduction in executive pay to levels that could be more palatable to wider society, a report from the High Pay Centre and human resources professional body The Chartered Institute of Personnel and Development (CIPD) has suggested. The report, which focuses on the role of remuneration committees and how they should be reformed, was released to coincide with what has been dubbed “Fat Cat Friday” in the UK. According to the two organisations, the average FTSE 100 CEO, on an average pay packet of £3.9 million (€4.3 million), only needed to work until 1pm on January 4th to earn as much in 2019 as the average UK full-time worker, with a gross annual salary of £29,574, would in the entire year. In their report on remuneration committees, the organisations said risk aversion was “the key barrier to addressing problems with executive pay.” (IPE)

W&D factory in Phnom Penh, Cambodia, has fired more than 1,000 garment workers who were on strike to demand unpaid benefits. The company, with the backing of Phnom Penh Municipal Court, issued an ultimatum to the workers saying that if they did not return to work within 48 hours, they would be fired. The workers responded by occupying the factory and worker representatives said they would not back down until their demands were met. The strike continued until Friday 4th January, when the company announced that workers who failed to comply with the order were fired. Bun Samnal, a worker representative, yesterday said about 1,200 garment workers were fired on Friday. He added that the company now has the obligation to pay the workers severance on top of missing benefits. (Khmer Times; Business & Human Rights)

UK water firm, Thames Water, faces a £2 million fine for a “foreseeable and avoidable” pollution incident in 2015, which saw raw sewage seep into an Oxfordshire stream and kill almost 150 fish. Judge Peter Ross ruled at Oxford Crown Court on 21 December that the incident in 2015 constituted a high-end, category three harm offence. The Court heard there were “numerous failures” in the management of a pumping station operated by Thames Water, which led to sewage created by two villages emptying into a brook leading to the River Evenlode, a tributary of the River Thames, for up to 24 hours. Judge Ross found Thames Water were “reckless” in polluting Idbury brook at Milton-under-Wychwood, near Chipping Norton. Thames Water, which pleaded guilty to the charges, was fined £2 million over the incident and ordered to pay court costs of almost £80,000. (Business Green)*

The Polish Wind Energy Association (PWEA) is battling to save the coal-reliant country’s burgeoning onshore wind sector from falling into long-term decline, amid controversial government proposals that could drastically slash the number of onshore turbines. In its latest intervention, the PWEA has called on Poland’s government to increase the maximum amount of onshore wind capacity it has pencilled in for auction this year from 1.5GW to 2.5GW. Raising the auction capacity for wind would also contribute to Poland’s binding EU target to meet 15 percent of its energy consumption from renewable sources by 2020, which it is currently in danger of missing, said PWEA president Janusz Gajowiecki. The move comes before the close of a crucial consultation this week on the Polish government’s draft 2040 energy strategy, which includes plans to almost entirely scrap the country’s existing onshore wind capacity over the next two decades. (Business Green)*

The 2019 Forum theme “Embracing the fierce urgency of NOW” inspired the development of the programme which features leadership labs, a Mission Possible call to action, live edie podcast, and more, giving you the most interactive and immersive experience on the day. Speakers from the likes of BEIS, Unilever, Coca-Cola, M&S, Carlsberg, Tesco, BT and more will address how to connect sustainability with profitability, unlock the power of purpose-driven strategies, and accelerate behaviour change.