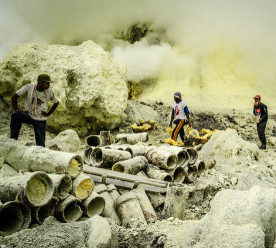 CEO Rich Handler said he won’t tolerate Jefferies Financial Group bankers shutting out their female colleagues for fear over the #MeToo movement. “There is no excuse to exclude anyone from business meals, top-level meetings, presentations, mentoring, travel or social situations based on gender or any other designation,” Handler, Jefferies’ chief executive officer, and Chairman Brian Friedman wrote in a memo to staff Thursday. The executives referenced a Bloomberg News story from earlier this month that reported many in their industry were avoiding being alone with female colleagues. That response is “thoughtless, paranoid and fundamentally wrong,” they wrote. “If you don’t know how to conduct yourself as a responsible, courteous and balanced human being, the fault lies exclusively with you and not with an allegedly flawed system designed to ensnare the innocent,” they said in the memo. (Bloomberg)

Illegal mining in Amazon rainforest has become an ‘epidemic’

An epidemic of illegal artisanal mining across the Amazon rainforest has been revealed in an unprecedented new map, pinpointing 2,312 sites in 245 areas across six Amazon countries. Artisanal mining for gold and other minerals in Amazon forests and rivers has been a problem for decades and is usually illegal. It is also highly polluting: clearings are cut into forests, mining ponds carved into the earth, and mercury used in extraction is dumped in rivers, poisoning fish stocks and water supplies. But its spread has never been shown before. “It has a big impact seeing it all together,” said Alicia Rolla, adjunct coordinator at the Amazon Socio-environmental, Geo-referenced Information Project, or RAISG, which produced the map. “This illegal activity causes as many social as environment problems and we hope there can be coordinated actions from the countries impacted to prohibit it.” (Guardian)

The Responsible Minerals Initiative (RMI), a coalition of leading companies dedicated to improving the security and human rights conditions in their mineral supply chains, have announced voluntary guidelines to drive the common adoption of definitions and concepts in the application of blockchain-enabled solutions. The RMI Guidelines represent a first industry effort to define a common set of principles, attributes and definitions for the application of blockchain technology to support mineral supply chain due diligence. “The RMI Blockchain Guidelines are a helpful first step to promote interoperability of blockchain projects in mineral supply chains and to help us understand the impacts of this technology on supply chains and communities,” said Michèle Brülhart, Director of Innovations, Responsible Business Alliance. (CSR wire)

Fashion giant H&M held a summit on 11 December to determine how best to ensure all supply chain workers receive a “fair” living wage, following campaigner accusations that it had failed to pay some garment workers enough to keep them above the poverty line. The summit, which was held at a converted garment factory in Phnom Penh, Cambodia, was attended by representatives from other fashion retailers as well as NGOs, supplier factories and investment firms. Campaigners, trade unionists and academics were also present for the discussion, which explored the key challenges facing fashion brands seeking to meet worker needs and eliminate human rights breaches from their global supply chains. During the discussion, H&M unveiled an independent review of its roadmap for wages, which includes a headline goal of ensuring 100% of its supplier factories and farms meet its “fair living wage” standards. (Edie)

Adverts showing a woman struggling to park a car or a man refusing to do housework while his wife cooks dinner will be banned from June 2019 as part of an industry-wide crackdown on sexist stereotypes. The change follows a review of gender stereotyping in adverts by the Advertising Standards Authority (ASA) – the organisation that administers the UK Advertising Codes, written by CAP. Under the new rules, British companies will no longer be able to create promotions that depict men and women engaged in gender-stereotypical activities, amid fears that such depictions are contributing to pay inequality and causing psychological harm. Adverts will no longer be able to show a person failing to achieve a task specifically because of their gender, such as a man unable to change a nappy or a woman unable to do DIY. (BBC; Guardian)