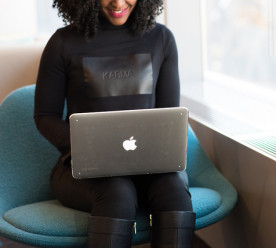 Barclays has become the first high street bank to allow customers to block payments with certain types of retailers in a bid to give people struggling with addictions more control over their spending. The feature will be available for customers using Barclays’ mobile app and could help those dealing with gambling problems to cut off their spending in betting shops and on gambling websites. People can also block their own spending in pubs, bars, supermarkets and on premium-rate websites and phone lines. A button within the Barclays mobile banking app enables customers to choose which types of retailers they are able to spend with. Attempted payments that fall within the “turned off” category will be automatically declined. Barclays said it will help all its customers take greater control over where their money can be spent, as well as making them less vulnerable to fraud and scams. (Guardian)

Three-quarters of boardroom appointments are still going to men, according to new research that suggests gender parity will “never be reached” at the top of the world’s biggest companies. Egon Zehnder, the global search company, examined board and senior executive roles at 1,610 public companies worth €7 billion or more in 44 countries. It found that just over a fifth of board seats were held by women, a 2 percentage point increase on 2016, but more than seven in every 10 appointments were still going to men. “With the rate of progress towards parity decelerating…fully balanced boards will never be achieved without a significant increase in the hiring of female directors,” said Jill Ader, who chairs Egon Zehnder. Companies needed to recognise the impact that a “critical mass” of women on the board and the executive committee made, and take steps to bring that about, she said. (Financial Times)*

The Chinese artist Ai Weiwei has created a flag to celebrate the 70th anniversary of the Universal Declaration of Human Rights to raise awareness of human rights across the UK and for generations to come. The new flag, commissioned as part of the ‘Fly The Flag’ campaign, launches to offer hope and to educate generations to come about the importance of universal human rights. The flag will be available to schools and care homes, town halls and office blocks, hospitals and libraries across the UK, with everyone invited to Fly The Flag for Human Rights six months from now between 24 – 30 June 2019 in events across the country. The Fly The Flag project is co-produced by Fuel (Lead Producer), Amnesty International, Donmar Warehouse, Human Rights Watch, Liberty, National Theatre, Sadler’s Wells and Tate Art Galleries. (Artlyst)

H&M Group, Inditex and adidas are among a group of 31 big-name fashion brands to have signed a new United Nations (UN) charter outlining steps the global fashion sector must take to limit the global temperature increase below 2C. Unveiled yesterday at the COP24 conference in Katowice, Poland, the charter sets a roadmap towards carbon neutrality by 2050. The document outlines 16 key principles for signatories, including a clause requiring participating businesses to reduce their overall carbon footprint by 30 percent by 2030. Signatories are also required to phase out high-climate impact raw materials from their products, packaging and supply chains, and to stop installing coal-fired boilers at supplier factories by 2025. The UN has set up six working groups in order to help businesses track and report on their progress on an annual basis. (Edie)

More than two million people in Africa are set to get new or improved access to clean energy with £100 million of funding from the UK, the Government has said. Hundreds of thousands of people in sub-Saharan countries will get access to electricity for the first time as extra funding supports up to 40 projects to deliver small-scale solar, wind, hydro and geothermal power. In total 2.4 million people could be supplied with electricity from new clean power projects over the next five years. The schemes are expected to cut three million tonnes of carbon emissions over their lifetime compared with using fossil fuels to supply the energy, the equivalent of the emissions from 800,000 cars in a year. The new funding for the renewable energy performance platform could unlock an extra £156 million of private finance into clean energy in Africa by 2023, the Government said. (ITV)