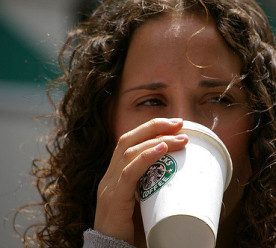 Google employees: We no longer believe the company places values over profits

Google employees are calling on the company to cancel Project Dragonfly, an effort to create a censored search engine in China. Critics say that by cooperating with the Chinese government, Google would have violated principles of free expression as well as users’ privacy rights. “Many of us accepted employment at Google with the company’s values in mind, including its previous position on Chinese censorship and surveillance, and an understanding that Google was a company willing to place its values above its profits,” an open letter signed by Google employees published Tuesday on Medium says. “After a year of disappointments including Project Maven, Dragonfly, and Google’s support for abusers, we no longer believe this is the case.” The number of signatures quickly grew, amounting to more than 100 several hours after the letter was published. (CNBC)

Starbucks and WestRock have completed a pilot to recycle fiber from 25 million coffee cups for new cups. Recycled paper company Sustana invested in pulping equipment to remove polyethylene liners from the cups and save the fiber, which was mixed into paperboard at WestRock’s mill in Evadale, Texas. Large rolls went to Seda packaging company for printing, cutting and forming. The pilot project was a way to “demonstrate that a coffee cup can be turned back into a coffee cup,” says Jay Hunsberger, VP of sales for North America from Sustana. The project demonstrates the use of closed-loop circular economy and proves, contrary to a widespread myth, paper coffee cups can be recycled cost-effectively. “We’re solving this problem of landfill and pollution and all this waste that’s really degrading the environment,” Rebecca Zimmer, Starbucks global director of environment, says in a video explaining the venture. (Food Engineering; Fast Company)

Countries are failing to take the action needed to stave off the worst effects of climate change, a UN report has found, and the commitments made in the 2015 Paris agreement will not be met unless governments introduce additional measures as a matter of urgency. Gunnar Luderer, one of the authors of the UN report and senior scientist at the Potsdam Institute for Climate Impact Research in Germany, said: “Only a rapid turnaround here can help. Emissions must be reduced by a quarter by 2030 [to keep warming to no more than 2C (3.6F) above pre-industrial levels] and for 1.5C emissions would have to be halved.” In all, a tripling of effort may be needed to keep warming to less than 2C, meeting scientific advice on avoiding the most dangerous effects of climate change.  (Edie)

A new report released today by Ceres finds that only a small fraction of America’s largest food and beverage companies are adequately monitoring emissions from their supply chains. Companies are missing opportunities to drive further emissions cuts and threatening the long-term viability of their business models, the paper finds. The investor backed non-profit used greenhouse gas emissions data from CDP to assess how well 50 of North America’s largest food companies are tracing and reducing their Scope 3 emissions. Just 15 of the companies assessed report on their Scope 1, 2, and 3 emissions. “The failure of most top food and beverage companies to adequately monitor, disclose on, and reduce Scope 3 emissions from agriculture poses substantial material risk, particularly in light of the growing necessity to assess and address threats and opportunities in exposure to the impacts of climate change, and increasing stakeholder demand for greater corporate transparency on ESG principles,” the report notes. (Business Green)

A toxic chemical leak in southern China which put 52 people in hospital and has cost affected fishing villages millions of dollars in lost revenue was 10 times worse than previously reported. Quanzhou city authorities on Sunday confirmed that 69 tonnes of the petrochemical C9 – a by-product of the oil refining process – had spilled into the local seawater, far in excess of the originally claimed seven tonnes. Two officials have been sacked for negligence, in addition to the arrests of seven people for their roles in the incident. The Quanzhou city government says senior executives at Fujian Donggang Petrochemical Company deliberately deceived local authorities about the extent of the contamination. “The incident was mainly caused by the negligence of the petrochemical company that led to a failure of chemical safety regulation,” the Quangang government said. (Business & Human Rights; South China Morning Post)

Image source: Picture 341 by Benjamin Davidson on Flickr. CC BY 2.0.