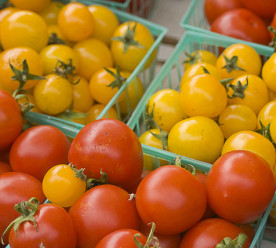 Hundreds of mostly African farm labourers downed tools and marched from fields in southern Italy chanting “we are not slaves”, protesting at conditions for tomato pickers after 16 migrant workers died in two road crashes. The near-identical accidents within 48 hours of each other highlighted the plight of farm workers around the city of Foggia in the Puglia region, where thousands of foreign labourers spend the summer season harvesting tomatoes. Although most of those working in the fields in Italy have regular papers, they rarely receive the benefits and salaries required by law, and many live in squalid conditions. “I work eight to 10 hours per day for €30 (£35), with only 30 minutes break at midday, and I still have to pay €5 for transport,” said one 22-year-old Malian worker. (Channel News Asia)

Adani and the Queensland government were aware that polluted water could be released from the company’s Abbot Point coal terminal during cyclone Debbie in 2017, conservationists say. Adani was granted a temporary emissions licence before cyclone Debbie hit to pollute the nearby Caley Valley wetlands in an area referred to as W1. After the cyclone hit, the government issued an amended licence that retrospectively allowed increased pollution from a second location, referred to as W2, towards the Great Barrier Reef world heritage area according to documents obtained by the Mackay Conservation Group. In 2017 the Queensland government issued a penalty notice to Adani for breaching the amended licence by more than 800%. A spokeswoman for Adani said the company “categorically denies” allegations that it attempted to hide information relating to the licences, suggesting that these reports are misleading. (Guardian)

Sainsbury’s has been named the most environmentally friendly supermarket in a major study looking at the carbon footprints of leading food retailers. Engaged Tracking, which carried out the study, revealed that the supermarket has the lowest emissions intensity in comparison to fellow competitors and notably twelve times lower than the worst-performing supermarket Iceland. The unit of measurement used conformed to industry norms by using “emission intensity”, the amount of carbon discharged by a company for every dollar of revenue it earns. Sainsbury’s and Tesco were by far the most efficient, being 9 times less polluting than 3rd placed Asda. Iceland came out as the least efficient supermarket, producing an intensity of emissions 34 percent above the average of the UK’s top 10 supermarkets. (City AM)

British billionaire Richard Branson and two dozen Caribbean nations and territories have announced the creation of a multi-million dollar program to turn the hurricane-prone region into a green tech hub resilient to disasters. The Caribbean Climate-Smart Accelerator marks the culmination of talks that began with Branson’s push to replace fossil fuel-dependent utilities with low-carbon renewable energy sources in the hurricane-ravaged Caribbean. After announcing the initiative at a gathering in Jamaica, Branson said the more than $4 million initiative serving 26 countries would give start-ups easier access to financing for large projects. The effort kicked off by rolling out a handful of projects, including an announcement that Airbnb, the home-sharing website service, was expanding to the Caribbean its “Open Homes” program that matches displaced disaster victims with local hosts with spare rooms free of charge. (Reuters)

Apple partners with Etsy, Swiss Re and Akamai on renewables project

Apple is collaborating with cloud services firm Akamai, reinsurer Swiss Re and e-commerce brand Etsy to develop two new wind and solar farms that will enable the companies to increase access to renewable energy in the eastern US. Apple, which announced earlier in 2018 that all of its global facilities are powered with 100 percent renewable energy, is engaging with other firms to enable them to purchase renewable energy. The companies will collectively purchase 125MW from a wind farm near Chicago and 165MW from a solar project outside Fredericksburg, Virginia. “At Apple, we’re proud to power all of our operations around the world with 100% renewable energy,” Apple’s vice president of environment, Lisa Jackson, said. “In the process, we’ve charted a course for other companies and organisations to purchase renewable energy and transition their own operations to greener power.” (Edie)

Sign up for Ethical Corporation’s webinar on SDG integration across the supply chain on 16th August 2018 (11am BST) to find out how innovative businesses are driving SDG-focused supply chain strategies. This 1 hour webinar will include insights from leaders such as Marks & Spencer, Interface, Cambridge Institute for Sustainability Leadership and SABMiller.

The webinar is being run in the lead up to Ethical Corporation’s Responsible Supply Chain Summit , taking place in London 10th-11th October 2018. To receive £200 off the price of your ticket use code CC200 at check-out.

Image source: The Tomato by Damian Gadal on Flickr. CC BY 2.0.