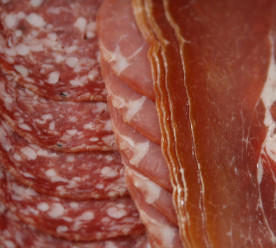 Meat and dairy companies are on track to be the world’s biggest contributors to climate change, outpacing even the fossil fuel industry, NGO’s have found in a recent analysis. The Institute for Agriculture and Trade Policy and GRAIN conducted an analysis of the planet’s 35 largest meat and dairy companies discovering the livestock sector could be responsible for 80 percent of the allowable greenhouse gas budget by 2050. China, the US, the EU, Canada, Brazil, Argentina, Australia and New Zealand together are responsible for over 60 percent of global meat and dairy emissions. The authors reported that only six had set targets that included their entire supply chain, despite this portion counting for up to 90 percent of total emissions. A paper published by Science found that if everyone stopped eating meat and dairy products, global farmland use could be reduced by three quarters. This led the study’s lead author to describe a vegan diet as “the single biggest way to reduce your impact on planet Earth”. (The Independent)

UN and Google team up to monitor environmental damage

UN Environment has announced a partnership with Google to provide trackable data on human impacts on the environment. The goal of the new partnership is to provide countries, NGOs, and the public with unprecedented levels of access to data through a platform that monitors environmental changes. Once completed, the platform will allow countries to see which areas and ecosystems are in need of the most immediate attention (e.g. freshwater systems), while also allowing them to track the progress that they have made. Compiling data can be slow and complicated, especially for smaller countries and, as a result, action on environmental problems is often hindered. This is something that the platform will attempt to change. Rebecca Moore, Google’s Director of Google Earth, stated: “We are excited to enable all countries with equal access to the latest technology and information in support of global climate action and sustainable development.” (Climate Action)

SC Johnson announced that it is the first major consumer packaged goods company to globally disclose fragrance ingredients down to .01 percent of the product formula across its portfolio of brands. This initiative demonstrates the company’s decade-long journey to transform industry efforts when it comes to ingredient transparency. Kelly M. Semrau, Senior Vice President stated, “Sharing more about product ingredients is good for families and important for the industry as a whole. We are pleased to see that our industry peers are following our lead and taking steps toward greater transparency.” The SC Johnson Fragrance Palette excludes about 2,400 ingredients that don’t meet the company’s high standards even though they meet industry standards and are legal in commerce. Consumers are able to learn more about SC Johnson’s Greenlist™ program and commitment to ingredient transparency at WhatsInsideSCJohnson.com. (Sustainable Brands)

Starting April 2019, large UK companies will need to report on both energy use and carbon emissions in a bid to simplify business reporting on climate. The government argues mandatory reporting like this will drive behaviour change in business, by raising awareness internally of energy efficiency and enabling investors to hold firms to account on their energy use. According to new rules announced yesterday by the Department for Business, Energy and Industrial Strategy (BEIS), unquoted (i.e. not stock-market listed) companies will have to report their energy use and emissions relating to gas, electricity and transport, and an intensity metric, through their company’s annual reports. Quoted companies will have to continue to report their global GHG emissions and an intensity metric, and now additionally start to report their global total energy use.  Launched yesterday was a Call for Evidence on what additional policies or regulations might be needed to meet the government target to improve business energy efficiency by 20 per cent by 2030, asking for industry and other stakeholder opinions. Organisations were given until the 26th of September to respond. (Business Green)

Rolls-Royce unveiled a concept, electric vertical take-off and landing (EVTOL) vehicle at the Farnborough International Airshow in the UK. The vehicle is estimated to be airborne by the early 2020s and would aid transportation systems in increasingly crowded cities. Rob Watson, who heads Rolls-Royce’s Electrical team, said that he envisions an electric version of the vehicle moving passengers around a city but a hybrid propulsion system carrying passengers longer distances, such as between London and Paris. David Stewart, an aviation and aerospace adviser and partner at Oliver Wyman, said that the aerospace environmental industry is reacting to a push to become less reliant on fossil fuels. “I think that electrical propulsion is a potential disruptor to the way things are powered,” Stewart said. “We are quite a long way for electrical power to be a replacement for kerosene, but never say never.” (The Washington Post)*