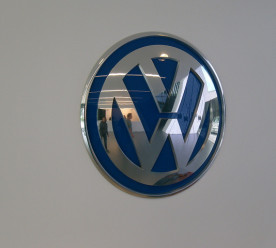 Volkswagen has been fined €1 billion by public prosecutors in Braunschweig, nears its Wolfburg headquarters, for its criminal role in the diesel scandal. Prosecutors had investigated whether the carmaker’s top executives neglected duties and gained an economic advantage by installing cheating software that understated emissions in laboratory tests. The investigation determined that “monitoring duties had been breached in the powertrain development department in the context of vehicle tests”. “Volkswagen AG accepted the fine and it will not lodge an appeal against it,” the carmaker said. “Volkswagen AG, by doing so, admits its responsibility for the diesel crisis and considers this as a further major step towards the latter being overcome.” The €1 billion fine is the largest penalty seen in Europe so far, though it pales in comparison to the more than $25 billion Volkswagen has paid for total damages in North America, including a $2.8 billion criminal fine. (Financial Times*)

Tubs of Strawberry Breeze-cake, Cherry Gale-cia and other wind-themed ice creams will feature in a campaign by Ben & Jerry’s to persuade the UK government to rethink its opposition to onshore windfarms. The renamed flavours will be sold at half price on “windy Wednesdays” to support a pro-renewables push by the Unilever-owned firm, which has a history of campaigning on climate change and environmental issues. The company’s intervention comes amid an industry lobbying effort to convince ministers to scrap obstacles for onshore windfarms. Ben & Jerry’s drive will feature a tour of the UK, including London, Birmingham and Bristol, to encourage people to take action supporting the technology. The firm is also backing a petition by the climate change charity 10:10, which calls on the government to “remove the additional planning requirements” for onshore windfarms. (Guardian)

The UK’s exports of plastic waste to south-east Asia have surged in 2018 following China’s crackdown on waste imports, in a trend that industry executives say may be unsustainable. The latest HM Revenue & Customs statistics show that UK exports of plastic waste to Malaysia tripled during the first four months of 2018 compared to 2017, making it the single biggest destination for British plastics. Exports to Thailand, rose fifty-fold in the four-month period, while those to Taiwan rose more than ten-fold. The shift underscores how the global market has changed after China – which was previously the world’s biggest importer of plastic waste – decided to close its borders. David Palmer-Jones, chief executive of recycling and recovery in the UK for Suez, the French waste and water utility, said the volatility in the global market for plastic scrap could present a “perfect opportunity” for the country to invest more in recycling infrastructure at home. (Financial Times*)

Apple has announced that it will change its iPhone settings to undercut the most popular means for law enforcement to break into the devices. The company told Reuters it was aiming to protect all customers, especially in countries where phones are readily obtained by police or by criminals with extensive resources, and to head off further spread of the attack technique. The privacy standard-bearer of the tech industry said it will change default settings in the iPhone operating system to cut off communication through the USB port when the phone has not been unlocked in the past hour. That port is how machines made by forensic companies GreyShift, Cellebrite and others connect and get around the security provisions that limit how many password guesses can be made before the device freezes them out or erases data. Now they will be unable to run code on the devices after the hour is up. (Reuters)

Tesla to cut nine percent of workforce in search of profitability

Electric car giant Tesla is letting go of nine percent of its workforce, in a major restructuring designed to get the firm on track to become “sustainably profitable”. Announcing the plans, Founder Elon Musk said most of the 3,000 jobs cut would be to roles and functions that had been “duplicated” as a result of the company’s rapid growth in recent years. In a statement Musk acknowledged the company was facing increasing pressure to provide its worth as a profitable business. “Given that Tesla has never made an annual profit in the almost 15 years since we have existed, profit is obviously not what motivates us,” Musk said. “What drives us is our mission to accelerate the world’s transition to sustainable, clean energy, but we will never achieve that mission unless we eventually demonstrate that we can be sustainably profitable. That is a valid and fair criticism of Tesla’s history to date.” (BusinessGreen)