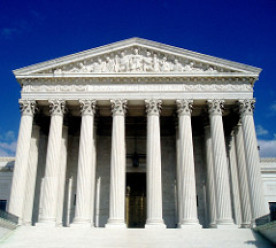 Updated Privacy Policies: The General Data Protection Regulation (GDPR) (EU) 2016/679 is a regulation in EU law on data protection and privacy for all individuals within the European Union. Ahead of its implementation on 25 May 2018, we have updated our privacy and cookie policies on our websites and for our mailing lists. If you no longer wish to receive information regarding the Corporate Citizenship Briefing, events or other communications we believe may be of interest or relevance to you, you are able to easily opt out. Please see the footer of this newsletter to update your subscription preferences or opt-out.

The US Supreme Court has delivered a blow to the rights of workers by allowing companies to require them to sign away their ability to bring class-action claims against management, agreements already in place for about 25 million employees. The justices, in a 5-4 ruling with the court’s conservatives in the majority, endorsed the legality of the growing practice by companies to compel workers to sign arbitration agreements waiving their right to bring class-action claims on issues such as overtime wages or gender-based pay disparities either in court or before private arbitrators. President Donald Trump’s administration reversed the government’s stance in the case, siding with the companies after former President Barack Obama’s administration had supported a U.S. National Labour Relations Board decision invalidating such employment agreements. (Reuters)

BHP Billiton faces legal action from shareholders who say the mining giant misled them over safety measures at a dam in Brazil which broke, killing 19 people and causing Brazil’s worst ever environmental disaster. When the Fundão dam broke in 2015, waste from an iron ore mine operated by Samarco, a joint venture between BHP and its partner Vale, devastated the local area in Minas Gerais state. Australian law firm Phi Finney McDonald now plans to sue the multinational on behalf of investors alleging that the company knew that the dam was at imminent risk of breaking but did not tell markets, in breach of regulations. Brett Spiegel, Principal Lawyer at Phi Finney McDonald also stated that “We allege that the company was also aware of the serious human, environmental, and financial consequences that would result. In our opinion, BHP breached its disclosure obligations by failing to disclose that risk to the market.” (Independent)

The most famous phrase in Google’s corporate philosophy, “Don’t be evil,” has been almost entirely removed from the technology giant’s code of conduct. Google previously included the phrase “Don’t be evil” at the very start of its code, and another two times within the first two paragraphs. The simple language was replaced by vague and less specific wording such as “ethical business conduct”. The updated code of conduct comes as artificial intelligence researchers call for Google to abandon a project developing AI technology for the military. Google’s refusal to cut ties with the US military led to the resignation of around a dozen employees from the company, who cited ethical concerns and warned that autonomous weapons directly contradicted the firm’s famous “Don’t be evil” motto. (Independent)

Airbnb has entered into a ground-breaking agreement with the Transport Workers Union of Australia to promote fair rates of pay and labour standards in the on-demand economy. Airbnb’s head of public policy for ANZ, Brent Thomas, told Fairfax Media that as a 21st century company it had a “responsibility to serve and strengthen the community and make sure technology was a force for good”. It has 4.8 million users and decided it would partner with package and food delivery companies that did not exploit their workers. Airbnb has agreed to actively promote a package or food delivery company that demonstrates it pays safe rates of pay and observes fair employment conditions. The agreement will expand to other parts of the transport industry and is similar to arrangements Airbnb has in the United States and India with civil society organisations. (Sydney Morning Herald)

A former coal plant in the north of England will become the test site for a new way to remove carbon dioxide from electricity generation. The Drax power company has released details of a new trial to develop bioenergy carbon capture and storage (BECCS), billed as the first of its kind in Europe. The £400,000 trial will begin imminently at Drax’s biomass power plants in Yorkshire. After an initial feasibility study, a second phase of the pilot is planned for the autumn. At this point, it is hoped a demonstration unit will be installed to isolate the carbon dioxide produced after burning biomass. Will Gardiner, CEO of the Drax Group, said: “If the world is to achieve the targets agreed in Paris and pursue a cleaner future, negative emissions are a must – and BECCS is a leading technology to help achieve it.” (Climate Action Programme)