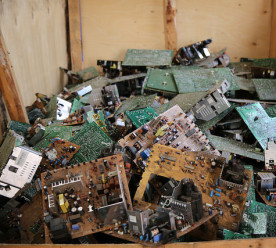 Shell’s global greenhouse gas emissions increased in 2017 due to increased fossil fuel output in some of its key markets, according to its latest sustainability report. The report shows that Shell’s direct emissions rose from 70 million tonnes in 2016 to 73 million last year, while its indirect emissions from the energy it purchased also ticked up from 11 million to 12 million tonnes. The oil giant blamed the rises on the inclusion in its emissions data of facilities previously operated by its Motiva joint venture, the reopening of previously shut down units in Singapore, and a rise in production from its QGC joint venture refineries in Australia. However, it said the increases were partly offset by several divestments last year as well as reduced production at its Pearl gas-to-liquids plant in Qatar. (BusinessGreen)

BP has teamed with Tesla to build its first battery storage project at one of its US windfarms as part of a strategy to expand its renewable energy business. Tesla will supply the 212 kilowatt/840 kilowatt hour battery at BP’s Titan 1 windfarm in South Dakota in the second half of 2018, with BP currently operating 12 other windfarms in the US. Providing large-scale battery power to windfarms allows them to store energy when wind is ample and make electricity available when demand is high, offering a crucial commercial advantage to an otherwise volatile energy source. “Lessons from the project will enable BP to make better informed decisions when evaluating and developing battery applications in the future,” BP said in a statement, having previously outlined their view that renewables will become an increasingly important fuel source this century. (Reuters)

The London offices of Rupert Murdoch’s Fox Networks have been raided by the European Commission as part of a continent-wide investigation into a possible sports broadcasting cartel. Officials have been carrying out “unannounced inspections” of companies in several countries over concerns the firms “may have violated EU antitrust rules”, with the inspections “a preliminary step into suspected anti-competitive practices” according to the commission. Fox Networks Group, an operating unit of 21st Century Fox which distributes TV and cable channels around the world, said it was co-operating with the investigation after its offices in Hammersmith, west London, were raided. There is no legal deadline for the completion of the probe and European Commission investigations can be lengthy. (Independent)

Unilever trials ad formats that give to charity if someone watches

Unilever brand Knorr is testing a new video ad format that allows viewers to choose a charity to benefit from the revenue it derives if they view an ad for at least 15 seconds. The technology was built by Good-Loop, which describes itself as an “ethical online video advertising platform seeking to fix the problems experienced in ad tech,” and the partnership with Knorr was forged though the Unilever Foundry, the FMCG company’s start-up platform. The month-long trial will see Knorr in-article video ads for its Chicken Stock Pot’s and Beef Concentrated Stock ranges run with a message indicating that if they watch until the end they can choose to donate (free of charge) to one of three charities – The People’s Kitchen, The Trussell Trust or WaterAid. The charity will then receive 50% of the revenue with the rest going to the publisher and Good-Loop as income. (The Drum)

A new report, published in the American Chemical Society’s journal Environmental Science & Technology, has found that recovering gold, copper and other metals from electronic waste is 13 times cheaper than extracting metals from mines. Researchers from Tsinghua University in Beijing and Macquarie University in Australia looked at data from eight recycling companies in China and calculated the cost for extracting metals from e-waste in a practice called urban mining. Although the study was limited to copper and gold extracted and processed from e-waste streams made up of recycled TV sets, the researchers say their results indicate a trend and potential to be applied across a broader range of e-waste sources and extracted metals. “If these results can be extended to other metals and countries, they promise to have positive impact on waste disposal and mining activities globally, as the circular economy comes to displace linear economic pathways,” they wrote. (Environmental Leader)