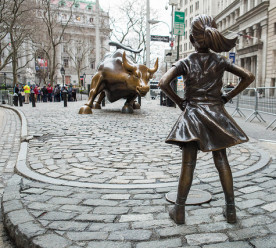 In the year since State Street’s Fearless Girl statue started her showdown with Wall Street’s Charging Bull, more than 150 of the companies that the $2.6 trillion asset manager  has targeted for not having a female director have added at least one. The company sent letters and engaged in an unprecedented withholding of votes at more than 400 companies. After focusing initially on 787 companies in the US, UK and Australia without a female director, State Street has added boards in Japan and Canada to the target list this year. It will also seek improved disclosure on diversity at all levels, to boost the pipeline of senior female executives. Other investors are following suit – BlackRock now expects companies to have at least two women on their boards and proxy adviser Glass Lewis has pledged to start recommending votes against directors at Russell 3000 Index companies with all male boards in 2019. (Bloomberg)

More than a thousand female aid workers from around the world have signed an open letter calling for urgent reform across the humanitarian sector, including better support for women who report sexual misconduct. The letter, addressed to the leaders of international charities, the UN and donors, urges organisations to treat allegations of sexual harassment and abuse as a priority. The aid sector is currently reeling from allegations that charities, including Oxfam and Save the Children, and the UN mishandled claims of sexual misconduct. The letter warns of the need for action rather than words. “We are gravely concerned that the culture of silence, intimidation and abuse will continue as soon as the media spotlight on this issue begins to dim,” said the signatories. The letter’s supporters acknowledged that, while they had focused on violence against women, men and boys also experience sexual harassment and exploitation. (Guardian)

Chinese retailers are cashing in on International Women’s Day, offering coupons and discounts on sportswear, cosmetics and healthcare to get women to spend more, dubbing the day “Queens’ Day” and “Goddesses’ Day”. The domination of the day by companies such as Alibaba has angered women’s rights activists, who want to reclaim the day as an opportunity to make progress on issues like combating sexual harassment. Feminist activist Xiao Meili highlighted that “The mainstream of Chinese society has not talked about real women’s rights issues on International Women’s Day for a long time.” “They don’t even dare use the three words ‘funujie’,” she said, referring to the original name of “Women’s Day” in China, which has connotations of working women. (Reuters)

Wells Fargo has agreed to publicly report on the root causes that led to a rash of ethical lapses in recent years, a group of investors said. The group, led by the Interfaith Centre on Corporate Responsibility and including about 20 religious organisations as well as state officials from Rhode Island and Connecticut, said they would withdraw a shareholder proposal on the issue. The investors asked Wells Fargo to produce evidence that its incentive programs are aligned with clients’ interest and to report on how it is strengthening risk management and controls. Wells Fargo has yet to put behind it 18 months of scandal in its retail-banking business, where employees under pressure to meet aggressive sales goals may have opened millions of accounts in customers’ names without permission. “They were in a culture where they believed their vision and values have carried them for the past 30 years and were continuing to carry them,” said Sister Nora Nash, who oversees retirement funds for Sisters of St. Francis of Philadelphia, which led the proposal. (Bloomberg)

The Prince of Wales’ Corporate Leaders Group on climate change has urged the EU to ensure its future financial initiatives and policy efforts are aligned with its climate goals. The group, which includes UK household names such as Unilever, Tesco, and Heathrow Airport, urged Brussels to ensure it remains consistent with the Paris Agreement “across all its programmes” and called for “clear signals from the EU that reinforce its climate leadership credentials and support future growth”. It stressed that without further ambitious regulatory and financial leadership going forward, the EU was now in danger of falling behind other emerging green economy powers such as China and India. Other signatories of the letter include EDF, Coca-Cola European Partners, Anglian Water, Lloyds Banking Group, Iberdola, United Technologies, Philips Lighting and Sky. (BusinessGreen)