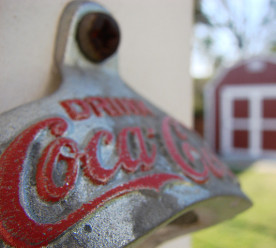 Coca-Cola is planning a break with 125 years to experiment with its first alcoholic drink as the world’s largest soft drinks company eyes Japan’s growing market for “Chu-Hi” alcopops. This move, positioned by a senior Coke executive as “unique in our history”, will propel the US company into a competitive alcopop market dominated by Japanese brands such as Strong Zero, Highball Lemon and Slat. The move into alcohol comes as Coca-Cola, like other large food groups, has faced shrinking sales in its core business – fizzy drinks. President of the Japanese business unit, Jorge Garduño, has said that this is an experiment for a specific aspect of their market and that he did not think people around the world should expect to see similar moves on a global scale. (Financial Times*)

Ireland has chosen Bank of New York Mellon to administer an escrow fund, where assets are held by a third party on behalf of two other parties, of up to €15 billion ($18.6 billion) in disputed taxes that the European Commission ordered the government to collect from Apple. The European Commission ruled in August 2016 that Apple had received unfair tax incentives from Ireland and last October said it was taking Dublin to the European Court of Justice over delays in recovering the money. Both Apple and Dublin appealed the original ruling, saying the iPhone maker’s tax treatment was in line with Irish and European Union law. The State has agreed to collect the amount, plus interest, in the meantime and hold it in escrow. (Reuters; Irish Times)

The Trump administration, seeking to force the state of California to cooperate with its agenda of stepped-up immigrant deportations, went to federal court on Tuesday to invalidate three state laws suggesting that these laws obstruct federal immigration law. The laws in question make it a crime for business owners to voluntarily help federal agents find and detain undocumented workers, prohibit local law enforcement from alerting immigration agents when detainees are released from custody, and create a state inspection program for federal immigration detention centres. The Trump administration lawsuit says that the law puts private businesses in an impossible situation as they are being required by the state to rebuff federal agents. (Los Angeles Times)

New research, from environmental consultancy Eunomia, suggests that UK homes and businesses recycle far less plastic waste than official data implies. The report, Plastic Packaging – Shedding Light on the UK Data, accuses the recycling industry of exaggerating recycling rates for plastic by up to a third, suggesting the UK may have missed recycling targets set by the EU between 2008 and 2012 because of the discrepancy.  According to official statistics, in 2015 the UK produced 2.26 million tonnes of plastic waste, of which 39 percent was recycled. But Eunomia claims the amount of waste produced was much higher, at around 3.5 million tonnes. The report suggests that perverse incentives discourage producers from declaring accurate packaging figures, with less packaging on the recycling market resulting in lower fees for compliance schemes – and less material to be recycled. (BusinessGreen)

L’Oréal makes moves towards becoming carbon neutral in the US

Cosmetics company L’Oréal has announced it has signed a new deal for one of its facilities to source 40 percent of its electricity from a landfill gas site in Kentucky as part of its ambitious target of achieving carbon neutrality within its US operations by 2019. Jay Harf, who leads on sustainability for L’Oréal, commented that the deal could be the first of many within the US: “We are proud to have found a local solution and approach with the potential to be replicated at landfills across the country.” The deal is expected to eliminate the carbon equivalent of 1.8 million gallons of gasoline consumed by L’Oréal each year. The company has been an early adopter of environmental initiatives and was recently named the most sustainable US company in 2017 by Newsweek. (Climate Action Programme)