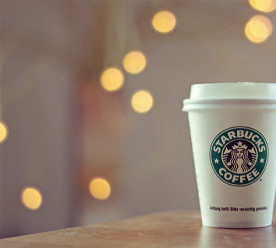 Starbucks will be the first UK coffee chain to trial a “latte levy” – a 5p charge on takeaway coffee cups – under plans that aim to reduce the overuse and waste of 2.5 billion disposable cups every year. The chain said it hoped the move, starting on Monday, would help change behaviour and encourage customers to switch to reusable cups instead. In the three-month trial, consumers buying hot drinks in takeaway cups in selected London branches of Starbucks (including the City and West End) will have to pay an extra 5p. The trial is being carried out with the environmental charity Hubbub, which will receive the proceeds of the levy and use it fund further research, with the addition of a charge for single-use cups deemed more effective than money off with the use of a reusable cup according to previous research. (Guardian)

Airbnb has previously sparred with regulators across the globe, including in their hometown of San Francisco regarding changes in short-term rental law, but Chief Executive Brian Chesky has pledged to take more responsibility for the company’s impact on housing markets and neighbourhoods. Suggesting that “Every year I think you have a sense you have even more responsibility than the year before.” Chesky’s view represents a striking evolution for the company, which just a few years ago defended itself as a passive technology platform, not responsible for what homes it listed or how they were used. “When Airbnb started 10 years ago it was kind of the culture that you really can’t take responsibility for what happens on your platform,” he said, outlining that executives at technology platforms need to better appreciate the scale of the impact their decisions have on the wider world. (Reuters)

Overnight shipping giant FedEx has ignored public calls to break ties with the National Rifle Association (NRA), with pressure building for companies to boycott the gun group in the aftermath of a Florida high school shooting that left 17 people dead. FedEx’s main link to the group is through the NRA Business Alliance, which offers members up to 26% discounts on their package costs. Delta and United Airlines, the US’s top airlines, announced on Saturday that members of the NRA will no longer receive discounted tickets. The First National Bank of Omaha similarly has announced it would not renew its contract for the NRA Visa card, citing customer feedback as driving this decision. The NRA has lashed out at these companies but suggests that “The loss of a discount will neither scar nor distract one single NRA member from our mission to stand and defend the individual freedoms that have always made America the greatest nation in the world.” (NY Daily News)

From 2019, large emitters will have to pay to pollute with Singapore planning to implement a carbon tax scheme. Facilities that produce more than 25,000 tonnes of greenhouse gas emissions or more in a year will have to pay this tax. The tax rate has been set an initial $5 per tonne of emissions, but will go up to between $10 and $15 per tonne of emissions by 2030. This is thought to impact 30 to 40 large emitters in Singapore, from mainly petroleum refining, chemical and semiconductor sectors. A total of 67 countries and jurisdictions, including China, the European Union and Japan, have implemented or announced plans to implement carbon pricing strategies such as carbon taxes and emissions trading schemes. (The Strait Times)

The performance of South Australia’s new lithium ion battery unit has helped “take the straw off the camel’s back”, according to a new review conducted by The Australia Institute. The review found that the battery, installed by Tesla in December 2017, is helping to stabilise the state’s energy demand, providing crucial breathing space for the national grid to meet supply on a second-by-second basis. In particular it found that the battery was helping to iron out the gaps where renewable energy wasn’t available, as intended, and that the new battery demonstrated the “very valuable role that energy storage can play in the operation of an electricity supply system with high levels of renewable generation” with it working in “smooth synergy with wind farms”. (Climate Action Programme)

Image Source: Starbucks day by rekre89 on Flickr. CC BY 2.0.