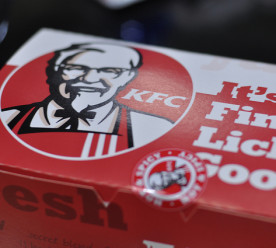 Almost two-thirds of the UK branches of KFC remained closed on Monday after the breakdown of a new supply contract for chicken with delivery network DHL, which had promised to set “a new benchmark” for service to the global fast food outlet. By lunchtime, more than 560 of KFC’s 900 UK restaurants were shut as “operational issues” at DHL left deliveries of chicken “incomplete or delayed” less than a week after the contract started. Mick Rix, national officer for the GMB union, said it had “tried to warn KFC” regarding their shift in distribution partner from the specialist food distribution firm Bidvest to DHL. Customers of the brand reacted with anger and frustration on social media with KFC unable to tell them when local restaurants would return to normal service. (Financial Times*)

The Organisation for Economic Co-operation and Development (OECD) and the Food and Agricultural Organisation of the United Nations (FAO) have launched a pilot project to kick-start the practical application of the OECD-FAO Guidance for Responsible Agricultural Supply Chains with 30 leading enterprises. The project aims to improve the implementation of the Guidance and internationally-agreed standards on responsible production, sourcing and supply chain management in the agricultural sector across all aspects of the agricultural supply chain. Since its adoption in 2016, the Guidance has been endorsed by multiple governments, including G7 Agricultural Ministers. The launch of this pilot project will strengthen the ability of companies to avoid contributing to adverse impacts on people, the environment and society while meeting global sustainability challenges. This work is carried out within the OECD’s sectoral work on due diligence for responsible business conduct and the FAO’s Umbrella Programme which supports sustainable and responsible investment in agriculture and food systems across the globe. (OECD)

Betting group William Hill has been fined £6.2 million by the gambling industry regulator for failing to protect consumers and prevent money laundering. The Gambling Commission said that over the course of two years, up to August 2016, the company failed to spot obvious signs of problem gambling and thus breached anti-money laundering and social responsibility regulations with ten customers able to deposit money linked to criminal offences, resulting in financial gains for the group of around £1.2 million. Neil McArthur, executive director of the regulator, said that “Gambling businesses have a responsibility to ensure that they keep crime out of gambling and tackle problem gambling – and as part of that they must be constantly curious about where the money they are taking is coming from.” The betting firm will now appoint external auditors to review its anti-money laundering and social responsibility policies and procedures. (Guardian)

A shift in consumer awareness around sustainability is causing a surge in demand for plant-based proteins – an emerging market opportunity that, findings have revealed, Nestlé and Tesco are best positioned to benefit from. In a report by the FAIRR initiative, Plant-based profits: Investment risks and opportunities in sustainable food systems, food companies are urged to diversify their protein sourcing away from a reliance on animal proteins with the market for alternative proteins set to expand at a compound annual growth rate of 8.29 percent in the next four years and could reach $5.2 billion by 2020. Tesco and Nestlé were praised for having set clear targets to reduce GHG emissions in supply chains containing high levels of livestock, as well as their willingness to provide detailed information to the investor coalition. Nestlé was further recognized for monitoring the proportion of R&D investment dedicated to developing plant proteins and what percentage of its proteins are derived from plant-based ingredients. (Sustainable Brands)

National Grid is exploring the possibility of rolling out a superfast charging network across the UK’s major motorways that is directly connected to the transmission system. With 50 strategic sites identified more than 90% of driver would be within 50 miles of an ultra-rapid charger at any given time. The chargers would reportedly deliver up to 350kW of electricity and reduce charging times to between 5-12 minutes. This would be a significant advancement on the 20-40 minutes it currently takes EV drivers to fill up their car, and would be similar to the seven minutes it takes on average to charge a petrol car. The Renewable Energy Association’s head of EV’s Matthew Trevaskis has described the announcement as an “important milestone” for the UK’s future EV charging network. (edie)

Social mobility is increasingly becoming a focus for UK organisations, with the business benefits of tackling the issue widely recognised. Organisations with an active interest in this all-important arena now have the opportunity to celebrate what they’re doing, by entering the UK Social Mobility Awards. This year an event to launch the awards will be held in Central London on Monday 19th March, 6-8pm. Companies that are interested in entering the 2018 awards, or are developing social mobility initiatives within their companies, are invited to attend and be inspired by speeches from and case studies of previous award recipients.

Contact Paola (paola.contessi@mtl.org.uk) to find out more information about the evening.