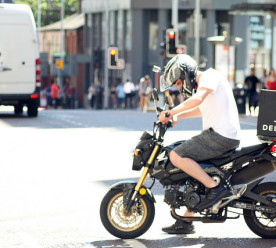 More than 450 investor, company and capital market leaders convened at the Investor Summit on Climate Risk last week to map out the next steps for increased action on climate change. The Investor Agenda debuted at the Summit identifies actions that investors can take right now in four key focus areas: investment, corporate engagement, investor disclosure and policy advocacy. The Agenda’s release comes as 256 investors with nearly $28 trillion in assets under management have now signed on to Climate Action 100+, committing to engage with the world’s largest corporate greenhouse gas emitters. During the Summit, influential US investors including the New York State Common Retirement Fund announced commitments to low-carbon investments. (Sustainable Brands)

A few weeks after Singapore’s government launched an initiative declaring 2018 the Year of Climate Action, a coalition of international green groups has issued an open letter calling on the country’s powerful banks to stop financing coal power in Asia. In the letter, NGOs said that if global warming is to be capped below 2°C above pre-industrial levels, Singaporean banks including DBS, OCBC and UOB must follow the lead taken by their European and North American counterparts such as Deutsche Bank, and stop funding new coal power plants. They also highlighted comments from World Bank president Jim Yong Kim, who has warned that plans to build more coal-fired power plants in Asia would be a “disaster for the planet” and undo commitments made to the Paris agreement on climate change. (Eco-Business)

The EU will no longer make trade deals with the US if President Trump follows through on withdrawing from the Paris climate agreement, according to a French official whose comments were endorsed by the European Commission. A spokesperson for the European Commission suggested that “…it would be difficult to imagine concluding an important trade deal without an ambitious chapter of trade and sustainable development attached to it.” One casualty would likely be the Transatlantic Trade and Investment Partnership (TTIP), an agreement still in stalled negotiations between the United States and the EU. While the US is the only country currently looking to exit the Paris agreement, there remain 25 countries that have yet to ratify the agreement, including Russia and Turkey. (Think Progress)

Gig economy workers have expressed anger that long-awaited changes to working practices in the UK have stopped short of bringing in new laws to prevent bogus self-employment, which reportedly denies basic rights to around 1.1 million couriers, minicab drivers and other workers. There had been hope the UK government would bring employment law into line with the judgements of several employment tribunals that have ruled in favour of gig economy workers – including for Uber and City Sprint – which ruled they are workers and not self-employed and so should enjoy paid holiday, the minimum wage and other rights. But the UK government has only pledged to consult on possible changes to the use of self-employment, despite a previous announcement pledging to make “tangible progress” in upholding workers’ rights. (The Guardian)

Nestlé, the multinational food and beverage company, has said that it will stop buying palm oil from a Guatemalan company that has been accused by the country’s prosecutor of corruption. In a news conference last week, Guatemala’s prosecutor accused Reforestadora de Palma del Peten (REPSA) of paying bribes to receive tax credits. “We have decided to stop our sourcing of palm oil from REPSA. We will honour existing contracts with the company, however these will not be renewed,” Nestle said in a statement, adding that the commercial relationship would be over by September. (Reuters)

Image Source: Deliveroo Biker – Deliveroo Delivery Drive on a Motorbike in Manchester by shopblocks on Flickr. CC BY 2.0.