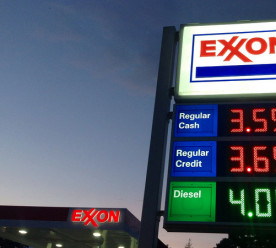 The UK government is putting pressure on major technology companies to commit to interviewing at least one female candidate for new jobs, amid fears about a lack of diversity in the industry, with only 17 percent of UK IT workers female. Margot James, the digital minister, will this week write to companies including Facebook, Google and Twitter asking them to adopt the Tech Talent Charter. The charter has been signed by more than 150 companies and tech organisations, including HP, Cisco and Sage – committing them to including women on interview shortlists and submitting diversity data for an annual report. However, many of the most visible technology companies including Apple, Microsoft, Amazon and Uber have so far declined to comment on whether they plan to sign the charter. (The Telegraph)

ExxonMobil plans to produce all of its proved oil & gas reserves, despite projected impact on emissions

ExxonMobil, the largest US energy group, has said it believes there is little risk that it will not be able to produce all of its proved oil and gas reserves, but has acknowledged that some higher-cost assets may not be developed. Exxon said that even if countries agreed to curb greenhouse gas emissions to limit the rise in global temperatures since pre-industrial times to 2°C, there would still be a need for trillions of dollars of investment in new oil and gas production. It added that demand for some of its assets, including its gas and US shale oil, would be particularly resilient even if fossil fuel consumption overall were to be constrained. Exxon was pushed into publishing the analysis by a vote by shareholders at its annual meeting last year. (Financial Times*)

Read more: Find out more about new climate risk reporting recommendations and their implications for the CDP questionnaires in our latest blogs.

African Development Bank plans to use solar power to provide 29.3 million people with electricity by 2020

The African Development Bank (AfDB) has unveiled its plan to help connect 29.3 million people in the continent with electricity by 2020. The bank is investing heavily in ways to help the estimated 640 million people in Africa who lack access to energy, as well as protecting them against climate risks. As part of its Desert to Power initiative, the bank will fund 10,000 MW of new capacity in the 1,000km Sahel region, close to the Sahara desert. It’s claimed that this project could eventually provide electricity for up to 250 million people, with 90 million currently living off-grid. The announcement was made by President of the Bank, Akinwumi Adesina at a meeting in Addis Ababa, Ethiopia: “When completed, we expect this to be the largest solar power system zone in the world.” (Climate Action)

Expatriate Americans face unexpected tax bills on their overseas business interests under repatriation rules Congress designed to persuade the likes of Apple and Google to bring back to the US profits they had accumulated in lower tax countries. The Tax Cuts and Jobs Act imposes a one-time “deemed repatriation tax” of 15.5 percent on the profits businesses have accumulated overseas, whether or not they choose to repatriate them as Apple has with its pledge to bring $38 billion back to the US. Charles Bruce, a former tax counsel for the Senate finance committee and now legal counsel to American Citizens Abroad, suggests that any individual US citizen or green card holder owning more than 10 percent of a “controlled foreign corporation” will be forced to pay this tax within eight years. (Financial Times*)

The UK’s Lloyds Banking Group, including Halifax, MBNA and Bank of Scotland, has banned credit card customers from buying bitcoin amid fears it could be left in debt as the cryptocurrency’s value deflates. Bitcoin’s decrease in value, having more than halved in recent months, has led to concerns that people who borrow money to purchase it will be left with large debts if the virtual currency continues to depreciate. Lloyds’s ban follows warnings from regulators in the US, South Korea, China, Russia and India as well as calls for global regulation by Germany’s Bundesbank. Facebook has also banned adverts for bitcoin and other cryptocurrencies on its sites after recent criticism from users about scams and hoaxes being promoted in their newsfeed. (The Guardian)