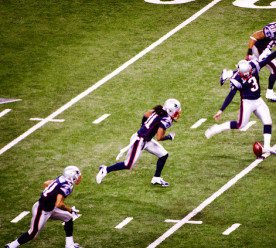 Facebook offered reassurances to investors on Wednesday that its digital ad business would remain highly profitable, despite a dip in usage on the social media network and an overhaul of its flagship News Feed. On Wednesday shares in Facebook fell more than 4 percent in after-hours trading following the release of its earnings report that stated that at the end of last year time spent by users had fallen by about 50 million hours per day. However Facebook remain resolute that the changes they are making will not hurt the business in the long term with Mark Zuckerberg stating that “The most important driver of our business has never been time spent by itself. It’s the quality of the conversations and connections.” COO Sheryl Sandberg has also suggested that the changes to reduce disinformation may in fact create “more monetization opportunities.” (Reuters)

Amazon has patented designs for a wristband that can precisely track where warehouse employees are placing their hands and use vibrations to nudge them in a different direction. The concept, which aims to streamline the fulfilment of orders, adds another layer of surveillance to an already challenging working environment. The proposed wristbands would use ultrasonic tracking to identify the precise location of a worker’s hands as they retrieve items. Whilst the wristbands are positioned by the patent documents as a labour-saving measure to keep track of products throughout the warehouse, a less generous interpretation would be that the wristbands provide Amazon management with new workplace surveillance capabilities that can identify the workers wasting time. Amazon already has a reputation for turning low-paid staff into “human robots” – working alongside thousands of proper robots – carrying out repetitive packaging tasks as fast as possible in an attempt to hit goals set by handheld computers. (The Guardian)

NFL aim for zero waste at Super Bowl in Minnesota, US this Sunday

Super Bowl LII on Sunday will debut a collaborative effort aiming for zero waste at US Bank Stadium in Minnesota. The project, Rush2Recycle, is a partnership among the NFL, PepsiCo, Aramark, US Bank Stadium, and the Minnesota Sports Facilities Authority (MSFA) to recover more than 90% of the waste generated during the game. On gameday, the initiative will encourage fans, chefs, and custodians at the stadium to recycle bottles and cans, compost organic materials, and repurpose items including signage, bags, and construction materials through community organisations. The zero-waste approach, although it requires significant investment up front, has long-term benefits said a MSFA spokesperson suggesting that “Ultimately, we feel it is our social responsibility to be proactive in reducing our carbon footprint and being as environmentally-friendly possible.” (Environmental Leader)

California Governor Jerry Brown has signed an executive order mandating the state of California to deploy at least five million zero-emission cars by 2030, going beyond the existing 2025 zero-emission vehicle goals by boosting the availability of charging and refuelling stations as well as other necessary infrastructure. The executive order does not only address fully electric vehicles but also hydrogen fuelled ones. The transport sector accounts for 50 percent of California’s emissions and almost 80 percent of smog-forming pollutants. Thus, it is seen as a crucial sector to be addressed if California’s climate targets are to be met. The new target is significantly scaling up ambition, as up until now the target was to deploy at least 1.5 million zero-emission vehicles by 2025. To achieve these new targets, the 8-year plan will see the state spend $2.5 billion on charging infrastructure alone. (Climate Action Programme)

Malaysian state-owned plantation company TDM Berhad has been accused by the Malaysian arm of WWF of accepting forest-covered land from the provincial government, with the alleged intent to clear it to develop palm oil plantations. In a press statement WWF said that TDM acquired 4,515 hectares of forest reserve land offered by the Terengganu state government earlier this month. As a member of the Roundtable on Sustainable Palm Oil (RSPO)— an industry association that promotes the use of sustainable oil palm products through certification— a plan to develop more plantations by TDM will contradict one of RSPO’s main missions: to minimise deforestation. The RSPO is already investigating the company to ensure that they continue to comply with its principles and criteria – with termination of TDM Berhad’s membership possible if non-compliance is revealed. (Eco-Business)