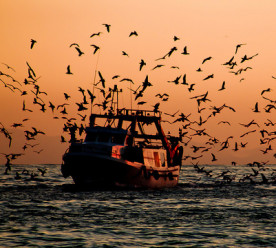 Toronto-based Corporate Knights’ annual Top 100 Most Sustainable Corporations in the World ranking has been unveiled in Davos. This year, a new KPI has been added to the methodology, focused on “clean” revenue. Sector weightings have also been introduced. Emerging as the top company is Dassault Systémes, the French multinational software company whose technologies assist companies and governments in adopting renewables and creating smarter cities. A close second is Finland’s Neste Oil, an oil refining and marketing company that has begun directing more than 90 percent of its investments into renewable fuel and bio-based materials. Automotive supplier Valeo has placed a strong emphasis on helping automakers reduce carbon emissions, while Belgian pharmaceutical corporation UCB and Finnish construction and engineering firm Outotec round out the top five. European companies dominate the rankings, accounting for 69 of the top 100. (Corporate Knights)

The first independent analysis of pharmaceutical industry efforts to tackle drug resistance has found that companies are developing new drugs, dismantling the incentives that encourage sales staff to oversell antibiotics, setting limits on antibiotics in wastewater, and tracking the spread of superbugs. In the Access to Medicine Foundation’s Antimicrobial Resistance Benchmark, GSK and Johnson & Johnson lead among the large research-based pharma companies, while Mylan leads the generic medicine manufacturers and Entasis leads in the biotechnology group. The Benchmark finds room for all companies to improve, as well as evidence of good practice. In particular, the Benchmark highlights that generic manufacturers, which account for the majority of antibiotics sold today, have the lowest levels of transparency of all the companies assessed. (Access to Medicines Foundation)

A group of the UK’s biggest advertisers has called on Facebook and Google to establish an independent body to regulate and monitor content on both their platforms. Members of the Incorporated Society of British Advertisers include Lloyds Banking Group, Unilever and Procter & Gamble. Other social networks and tech platforms, such as Twitter and Snapchat, would also be invited to join. Pressure for regulatory action against technology platforms is increasing across Europe. Last year Germany introduced fines of up to €50m for companies that do not remove hate speech or fake news within 24 hours of receiving a complaint. Theresa May, the UK prime minister, has called on technology groups to remove terror-related content within two hours of it appearing online. (Financial Times*)

Forced labour and other rights abuses are widespread in Thailand’s fishing fleets despite government commitments to comprehensive reforms, according to Human Rights Watch. The report, Hidden Chains: Forced Labour and Rights Abuses in Thailand’s Fishing Industry, describes how migrant fishers from neighbouring countries in Southeast Asia are often trafficked into fishing work, prevented from changing employers, not paid on time, and paid below the minimum wage. Migrant workers do not receive Thai labour protections and do not have the right to form a labour union. The report says that human rights protection measures often prioritise form over results, with ship owners and skippers concealing coercion and deception “behind a veneer of compliance”. (Human Rights Watch)

The UK government is opposing strong new recycling targets across the EU despite its recent pledge to develop “ambitious new future targets and milestones”, confidential documents have revealed. A 25-year environment plan was launched earlier in January by the prime minister, Theresa May, who particularly focused on cutting plastic pollution. A target to recycle 65 percent of urban waste by 2035 was agreed by the European council and parliament in December, having been watered down from the 70 percent by 2030 originally sought, and now awaits a vote of approval by member states. The UK’s opposition to this target is revealed in a record of a subsequent briefing for EU ambassadors, obtained by Greenpeace, with it stated that “The UK cannot support a binding target of 65% for 2035,” and their opposition to this target means that the UK will not support the overall waste agreement. (Guardian)