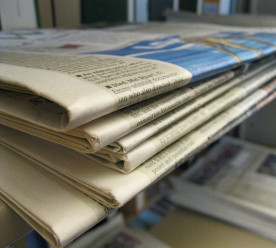 Citigroup has become the first big Wall Street bank to disclose internal data on the gender pay gap, bowing to an activist shareholder (Arjuna Capital) that last year launched an unsuccessful campaign against six of the largest US financial institutions. The disclosure is selective, including only employees in the US, UK and Germany and adjusting for factors including job function, level and geography. Citibank has yet to disclose under new, more prescriptive British government rules that do not allow for such adjustments. Citibank’s figures show that its gender pay gap in the US, the UK and Germany is just 1%, and the bank’s ethnic minorities in the US earn 99% of what their white peers do. But research by the Financial Times last year found that while women made up 51% of Citi’s global workforce, they made up 42% of mid-level executives and 43 per cent of seniors. (The Financial Times*)

Iceland supermarket chain to eliminate plastic on all own-branded products

Iceland has becomes the first major UK retailer to commit to eliminating plastic packaging for all its own-brand products. The supermarket chain, specialising in frozen food, said it would switch to paper and pulp trays and paper bags within five years to help end the “scourge” of plastic pollution. The supermarket recently carried out a survey in which 80% of 5,000 people polled said they would endorse the move to go plastic-free. Iceland managing director, Richard Walker, said that as it was technologically and practically possible to create less environmentally harmful alternatives, “there really is no excuse any more for excessive packaging that creates needless waste and damages our environment”. Greenpeace UK executive director, John Sauven, called the announcement a “bold pledge” and said it was “now up to other retailers and food producers to respond to that challenge”. (The Guardian)

McKinsey has been ordered by a South African court to forfeit its share of a R1.6 billion ($129 million) contract tied to the controversial Gupta family after prosecutors argued the fees may be the proceeds of corruption. The Gupta family have been accused by civil society groups of using their friendship with President Jacob Zuma to loot state-owned firms such as Eskom (South Africa’s state-owned electricity utility), and to control other government business. McKinsey’s work for Eskom has been mired in controversy because its partner on the work, Trillian Capital, was owned by an associate of the Guptas until 2017. McKinsey and Trillian will have 90 days to show that the Eskom contract was lawfully awarded or the assets will be forfeit to the state. (The Financial Times*)

The UK’s Virgin Trains will once again stock copies of the Daily Mail, after a decision to ban sales of the newspaper on the company’s trains led to accusations of censorship. The ban came into force following a company memo raising “considerable concern” about the Daily Mail’s editorial position on issues such as immigration, LGBT rights and unemployment. The Daily Mail had claimed Virgin was acting for political reasons, citing the fact that Virgin boss Richard Branson was pro-Remain in the UK’s Brexit referendum. But Branson said he knew nothing about the ban until it was announced. He added that the company “must not ever be seen to be censoring what our customers read and influencing their freedom of choice” or be seen to be “moralising on behalf of others”. (Sky News)

Saudi Arabia’s ACWA Power has announced it is adopting the cryptocurrency SolarCoin, a move that will reward the Riyadh-based utility company for producing solar energy. SolarCoin is a blockchain-based digital currency that’s designed to accelerate the transition to clean energy technology by incentivising global solar energy production. Through a rewards system, verified solar electricity producers can earn SolarCoins for free by simply producing solar energy. Cryptocurrencies themselves have been criticised for having an extremely large energy footprint. However, SolarCoin claims to have circumvented this problem by using ‘proof-of-stake’ technology to dramatically cut the energy required for digital ‘mining’ activities. (Forbes – Middle East; BusinessGreen)