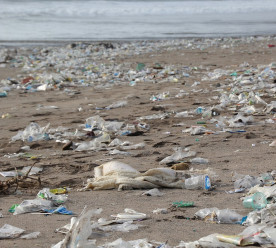 Jon Lloyd talks about the issues of trust and exaggeration when it comes to corporate giving. Read the blog here.

ExxonMobil, the world’s largest listed oil and gas group, will start publishing reports on the possible impact of climate policies on its business. In a regulatory filing, Exxon said it would introduce “enhancements” to its reporting, including analysis of the impact of policies designed to limit the increase in global temperatures to 2°C. At Exxon’s annual meeting in May, investors controlling about 62 per cent of shares backed a proposal calling for an annual assessment of the impact of technological change and climate policy on the company’s operations. The company’s board had originally opposed the proposal, but on Monday the company said that the board had “reconsidered. . . [and] sought input from a number of parties, such as the proponents and major shareholders” before deciding to accede to improved reporting on climate policy risk. (Financial Times*)

British Airways, the Royal Bank of Scotland and Porsche are among five large companies that have been identified as having paid corporate intelligence firms to monitor political groups that challenged their businesses, according to an investigation published in The Guardian. The cache shows how one of the firms, C2i International, used two infiltrators to acquire advance warning of demonstrations that were being mounted against firms. The infiltrators pretended to be activists, helping to organise and attending their demonstrations and obtaining internal documents. Caterpillar, one of the world’s biggest manufacturing companies, hired C2i, which gathered information about a grieving family that was taking legal action against the firm. Caterpillar declined to answer specific questions. It said: “Where Caterpillar uses outside firms, the company would expect those firms to act in a lawful manner and in accordance with our values in action.”  (Guardian)

A tax on meat in many countries looks increasingly likely as governments strive to comply with the Paris Agreement, an investor group has warned. The possibility of a behavioural tax, also known as a “sin tax”, has been increased by a global consensus around the role meat plays in both climate change and illnesses including cancer, according to the Farm Animal Investment Risk and Return (FAIRR) investor network. The forum, which informs investors of the risks involved in intensive livestock farming, has produced a report claiming that meat could soon be taxed in the same way as tobacco and sugar. Countries such as Sweden and Denmark have already looked into a meat tax, or “livestock levy”. The UN’s Food and Agriculture Organization has estimated that livestock cause 14.5 per cent of global greenhouse gas emissions. (City AM)

A former Facebook executive has said he feels “tremendous guilt” over his work on “tools that are ripping apart the social fabric of how society works”, joining a growing chorus of critics of the social media giant. Chamath Palihapitiya, who was vice-president for user growth at Facebook before he left the company in 2011, said: “The short-term, dopamine-driven feedback loops that we have created are destroying how society works. No civil discourse, no cooperation, misinformation, mistruth.” The remarks, which were made at a Stanford Business School event in November, surfaced on Monday. Palihapitiya’s comments were made one day after Facebook’s founding president, Sean Parker, criticised the way that the company “exploit[s] a vulnerability in human psychology” by creating a “social-validation feedback loop”. Social media companies have faced increased scrutiny over the past year as critics increasingly link growing political divisions across the globe to the handful of platforms that dominate online discourse. (Guardian)

The Cornish town of Penzance has today become the first place in the UK to be officially accredited as a ‘Plastic Free Coastline Community’, as part of a major new campaign from Surfers Against Sewage (SAS) that has seen nearly 100 sites across the country begin work to restrict their use of plastic. The recently-launched Plastic Free Coastline initiative sets out five guidelines for communities to follow to limit their consumption of single-use plastic packaging, which has been widely blamed for polluting marine habitats. The guidelines include working with local businesses to replace single use plastic with sustainable alternatives, educating people on the damage plastic pollution can do, and organising community-led beach clean initiatives. (Business Green)