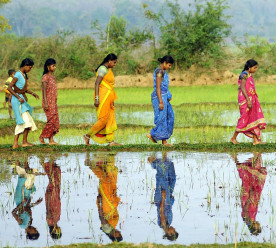 Britain’s Oxford University has teamed up with nine of the world’s biggest companies, including Walmart and Coca-Cola, to increase women’s financial clout by sharing success stories. The new Global Business Coalition for Women’s Economic Empowerment (GBC4WEE) initiative gathers companies already engaged in substantive women’s empowerment programs and aims to share and determine best practices and improve impact metrics. Goldman Sachs, Mondelez International, PwC, Marks & Spencer and the ExxonMobil Foundation also joined the coalition. Studies repeatedly show that more women working accelerates economic growth, while women also invest more of their income into families to educate children and end poverty, yet about half of the world’s women are in the labour force compared with about 75% of men. (Thomson Reuters Foundation)

Google will dedicate more than 10,000 staff to rooting out violent extremist content on YouTube in 2018, the video sharing website’s chief Susan Wojcicki has said. According to Wojcicki, some users were exploiting YouTube, owned by Google, to “mislead, manipulate, harass or even harm”, adding that staff had reviewed nearly two million videos for violent extremist content since June and removed more than 150,000 of them. Earlier this year, advertisers including Marks & Spencer, Tesco and Pepsi withdrew their ads from YouTube due to concerns about unsavoury or illegal content. Last month, Mars, Deutsche Bank and Adidas were among the latest to pull ads after reports they were being shown alongside inappropriate comments on footage of children. Wojcicki said Google was taking “aggressive action” on comments and was working “closely with child safety organisations around the world”. (BBC)

Patagonia to sue Trump over rollback of national monuments

Outdoor retailer Patagonia is planning to sue the Trump Administration following President Trump’s announcement that his administration will shrink the size of the Bears Ears National Monument in Utah by 85%. To generate consumer awareness on the risks of environmentally destructive corporate activities, the company changed its homepage Monday afternoon to a bold, black screen, which read: “The President Stole Your Land: In an illegal move, the president just reduced the size of Bears Ears and Grand Staircase-Escalante National Monuments. This is the largest elimination of protected land in American history”. Several environmental groups filed a lawsuit hours after Trump’s speech and many others, including Friends of Cedar Mesa, Utah Dine Bikeyah and Archeaology Southwest as well as Native American tribes, said they will join Patagonia in its lawsuit. (Fortune; AdAge)

New analysis from The Nature Conservancy, WRI and others has found that stopping deforestation, restoring forests and improving forestry practices could cost-effectively remove 7 billion metric tons of carbon dioxide annually, or as much as eliminating 1.5 billion cars – more than all of the cars in the world today. Protecting forests was found to be the greatest potential to mitigate climate change based on land area, with Brazil and Indonesia offering the greatest mitigation opportunity. According to the study, 42% of the total emissions reductions that could be achieved from reforestation depend on reducing pasture land, which is however challenged by the growing demand for food, including meat from livestock. (Eco-Business)

At least two million workers in Britain are losing over £3 billion in unpaid holiday pay and wages a year, according to a new report by Middlesex University London, funded by Trust for London. The research found that not paying wages, withholding holiday pay or workers “losing” a couple of hours’ money a week are some of the methods employers are deliberately using to boost their profits. The analysis is based on employment tribunal judgement data, Labour Force and Family Resource surveys, case studies and interviews. Key recommendations include making the UK’s tax authority responsible for paying minimum wage arrears and collecting the money from employers, introducing penalties for failure to provide holiday pay or payslips, and stronger sanctions against company directors deemed to have deliberately withheld pay. (Middlesex University London)