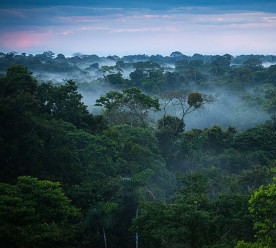 A new report from the industry-led International Tourism Partnership (ITP) has warned that the hotel industry must eliminate 90% of its carbon emissions by 2050 if the sector is to stay within the limits of the Paris climate goals. Published by hospitality consultancy Greenview, the research was carried on behalf of a group of leading hotels brands such as Four Seasons, InterContinental, Marriott International, and Hilton. Despite the large emissions reductions required, ITP’s director Fran Hughes insisted the cuts were achievable, only requiring hotels to “accelerate solutions that are currently available”. The report recommends investment in more efficient buildings, increased renewable energy use, and introducing reward schemes to encourage greener guest behaviour. The analysis follows ITP’s move in September to set the first industry-wide carbon and water targets for the tourism sector. (Business Green)

Read more: Why 2018 will be the year of climate risk reporting.

As part of its ‘CanopyStyle’ initiative, environmental NGO Canopy has released an updated and expanded edition of its Hot Button Report, a ranking of eleven viscose and rayon producers that represent 70% of global viscose production. The report is the first tool of its kind to enable apparel brands and retailers to robustly assess producers’ impacts on the world’s forests. Two major producers, Birla Cellulose and Lenzing, which represent 25% of global supply, have reached “light green shirt” level while two producers – Jiangsu Xiangsheng Viscose Fiber and Aoyang Technology – continue to rated as “red shirts” and remain unresponsive. Three producers made progress on transparency by listing their pulp suppliers publicly on their websites. Three Chinese producers, Sateri, Sanyou and Fulida, are pursuing CanopyStyle Audits, with results expected in late 2017. (Sustainable Brands)

UN forum closes with the spotlight on entrepreneurs for sustainable development

The UN’s World Entrepreneurs Investment Forum has concluded in Bahrain with a strong call for the integration of entrepreneurship and innovation in all economic and social dimensions as key strategies to implement the Sustainable Development Goals (SDGs). The forum, which had over 60% women delegates, underscored the importance of the “active involvement” of women in all sectors related to the SDGs through entrepreneurship and innovation.  Speaking at a press conference where the outcome – the “Manama Declaration” – was unveiled, Miroslav Lajčák, the President of the General Assembly, also highlighted the importance of the means of implementation for sustainable development, and called for innovative partnerships between all sectors. (UN News)

Global household product manufacturer SC Johnson has announced it has received Conservation International (CI)’s Global Conservation Hero award. CI paid tribute to the company’s long support for the Amazon region and recognised its collaboration and sustainable action with local communities. Recent actions include a partnership with CI to save 10,000 acres of Amazonia through an acre-for-acre match campaign, via the virtual reality film ‘Under the Canopy’. The campaign, which garnered donations from all 50 US states and 31 countries through CI’s website, will be used to kick off the world’s largest tropical reforestation project in the Brazilian Amazon, which aims to restore 73 million trees by 2023. The news follows a recent study, which found that conservation investments are not only effective but are “remarkably cheap”. (Market Insider)

Michael Gove, Secretary of the UK’s environment department Defra, has vowed to consult on the creation of a new environmental body to ensure the UK avoids a “governance gap” after leaving the EU. While the UK’s Repeal Bill pledges to preserve EU environmental laws after Brexit, the Environmental Audit Committee has warned that without an equivalent governance architecture in place, the transposed EU laws could result in “zombie legislation”, no longer updated in UK laws. Gove said there was a “strong and powerful case” for an independent body with the power to “potentially fine or otherwise hold government and public bodies to account… in a way that the EU itself currently cannot”. Gove also assured the 25-year plan, expected before Christmas, would feature new policies in areas such as recycling, biodiversity and voluntary food waste targets. (edie)

Image Source: A small part of the Amazon between Brazil and Peru by Brazilian Things at Wikimedia Commons. CC 4.0.