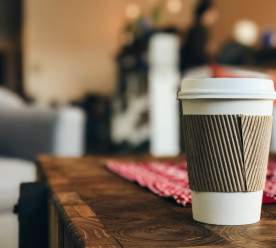 Some of the UK’s largest coffee shops have joined forces to battle Britain’s cup waste mountain, announcing plans to develop a nationwide recycling system for takeaway cups. The fourteen organisations, including Caffè Nero, Costa Coffee, Greggs, McDonald’s UK, Pret A Manger and Starbucks, will help fund a new programme to add more than 400 more recycling facilities with a specialised paper cup collection point in order to help divert from landfills the seven million cups thrown away every day in Britain. Cups from the new sites will be taken to Alliance for Beverage Cartons and the Environment (ACE UK)’s recycling facility in Halifax. ACE UK said it will lobby local councils to get cups included in more kerbside collections. Participants are also hoping the programme will stimulate the market for coffee cup recycling to make it viable for streetside collection points to be installed in city centres. (Business Green)

Kobe Steel, Japan’s third-largest steelmaker and a supplier of global companies including Boeing, Toyota and Nissan, has added another metal to the list of products for which it may have falsified quality data. The company admitted at the weekend to falsifying inspection data on an estimated 20,000 tonnes of metal shipped to about 200 customers in the year to August 2017. Aluminium and copper products – supplied to carmakers Honda, Mazda and Subaru – have also been affected but Kobe Steel said it had no evidence of any safety concerns owing to the false certification. The company has warned that the problems in certification could date back 10 years. The scandal comes two weeks after carmaker Nissan recalled nearly 1.2 million vehicles that had been certified by unauthorised technicians. (Financial Times)*

Paying National Insurance contributions for its British drivers would “certainly” add “tens of millions” of pounds to the Uber app’s costs, the firm’s UK Head of Policy Andrew Byrne has told Parliament’s Business Committee. Uber currently classifies its around 50,000 UK drivers as self-employed, meaning they do not receive rights such as sick pay and the minimum wage. Also appearing before lawmakers, Deliveroo’s UK and Ireland Managing Director Dan Warne said additional costs including National Insurance contributions would add around £1 to the cost of each hour. National Insurance is collected by the government and helps pay for the state health service, pensions and certain other benefits. Firms operating in the so-called gig economy have been criticised by unions and some lawmakers for their “exploitative practices”. Uber currently has until Friday to lodge an appeal against the suspension of its London license. (Reuters)

Singapore Airlines to use more sustainable ingredients for in-flight meals

Singapore Airlines says it will use more sustainable and “meatless ingredients” in its in-flight meals as part of its new ‘From Farm to Plane’ initiative to promote environmental sustainability and support local farmers. Local produce will be sourced from farms from Singapore through a partnership with the Kranji Countryside Association as well as from destination countries. The Association’s President Kenny Eng said that the move represents a “big milestone”. The airline’s chefs will be hosted by local farmers in Kranji to try local produce that could be used for in-flight meals. The initiative will add to the company’s current efforts to source fish certified by the Marine Stewardship Council for its in-flight meals. (Channel News Asia)

BNP Paribas has announced a new global financing policy in line with a two-degree climate scenario, which will see the bank cease working with companies involved in the exploration, production, distribution or marketing of oil and gas from shale or oil from tar sands. The bank will also stop financing projects involved in the transportation or export of oil and gas from shale or tar sands and gradually cease supporting clients not actively engaged in the transition to a lower carbon economy​. Meanwhile, the Group has already committed to a target of €15 billion total financing for renewable energy by 2020, and €100 million of total investments in start-ups specialising in energy transition. The announcement follows the launch of the bank’s ‘Parvest’ Green Bonds. (Global News Wire)