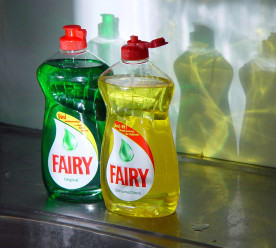 Several leading trade and business organisations, including the British Chamber of Commerce and the University of Cambridge’s Institute for Manufacturing, have urged the UK government to develop a “leaner, cleaner manufacturing” strategy in order to boost the country’s productivity. Around half of manufacturers’ costs are on resource inputs, they said, making resource efficiency a priority for any productivity gains. While the best UK manufacturers have cut their energy use by 50% over the past 10 years, the majority have only managed a reduction of 10-15%. The calls come alongside a new report by Green Alliance, which estimates that resource efficiency improvements could add £10 billion to manufacturers’ profits, while increasing productivity, safeguarding jobs, and supporting growth in manufacturing regions. It also highlights that the new strategy could help provide a long term view of economic risks to institutional investors. (Business Green)

Procter & Gamble (P&G) has launched a new Ocean Plastic bottle for its Fairy-brand dishwashing liquid. The bottle is made with 10% ocean plastic, collected from the ocean and beaches around the world. The remaining 90% is post-consumer recycled plastic. The UK launch will include 320,000 ocean plastic bottles for the Fairy dishwashing brand. Created in partnership with recycling expert TerraCycle, the company plans to extend the initiative across more regions and other brands – including Dawn, Yes, Dreft and Joy – in the future. P&G also released a limited run of Head & Shoulders shampoo bottles in France over the summer. The announcement follows a recent study by Greenpeace which found P&G among the biggest contributors of plastic pollution in the Philippines. (Environmental Leader)

French car manufacturer Renault has announced it will tap into the electric vehicle (EV) and autonomous driving (AD) markets by rolling out 8 EVs and 12 hybrid models by 2022. The new EV portfolio will be accompanied by 15 autonomous vehicles, one fully-autonomous model and new mobility services such as ride-hailing options and a “robo-taxi” service, both of which will be delivered by 2022. The plan will leverage an €18 billion research and development investment, which will be backed by other investments from the Renault-Nissan alliance, the world’s largest automotive partnership. The alliance added Tokyo-based Mitsubishi recently, after Nissan purchased a 34% holding in the car maker. (edie)

Dove has apologised “deeply and sincerely for the offence” caused by an advert on its Facebook page which showed a black woman turning into a white woman supposedly after using Dove body lotion. The brand was accused of racism and later admitted it had “missed the mark… in representing women of colour thoughtfully”. The campaign has since been removed from Facebook but was shared by Naomi Blake, an American makeup artist. The brand, which is owned by Unilever, stated that the ad “did not represent the diversity of real beauty which [the brand] is passionate about and is core to [its] beliefs” and that “it should not have happened”.” However many social media users have called for a boycott of Dove’s products. (Guardian)

BNP Paribas Asset Management (AM) has launched the Parvest Green Bond, which identifies investments expected to have the most positive environmental impact. It invests in bonds used to finance projects designed to address climate change issues. Currently valued at €100 million, it is managed by BNP Paribas AM’s fixed income team while leveraging proprietary analysis provided by its sustainability research team. Analysis conducted by BNP Paribas AM suggests that between now and 2030, $4 trillion will be required annually to support the energy transition towards a low-carbon economy. Green bonds are often seen as the missing link between the need for energy transition financing and supply from debt capital markets, and are therefore ideally suited to support low-carbon and climate-resilient development. (FT Adviser)