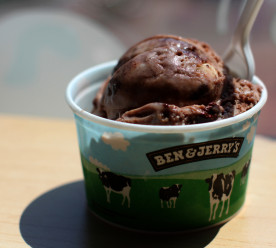 Ben & Jerry’s has signed an agreement with farmworkers’ group Migrant Justice that establishes labour standards for the company’s dairy suppliers in Vermont. The ice cream company, a subsidiary of Unilever, has previously not had a way of monitoring working conditions in the industry. A 2014 Migrant Justice survey of about 170 dairy workers found that in addition to a scarcity of days off, workers’ schedules frequently kept them from sleeping more than a few hours, while many of the migrants had substandard housing. Under the ‘Milk With Dignity’ programme, workers will have the right to one day off a week, will earn at least the state minimum wage, and will be guaranteed decent accommodation and at least eight consecutive hours of rest between shifts. Workers will be informed of their rights and encouraged to report violations to a 24-hour hotline. (NY Times)

Asda and Co-op team up to share supply chain data

Competing UK retailers Asda and the Co-op have taken collaborative action to drive supply chain efficiencies by working with digital platform 2degrees to jointly collect data on waste, water and energy from mutual suppliers. By eliminating the need for duplicated information, suppliers will be able to focus their time and effort on delivering quality products, while saving on time, money and resources. Commenting on the announcement, the Co-op Food Sustainability Manager Sarah Wakefield said such collaboration means “suppliers can focus on what matters most – making great quality products with the lowest environmental impact possible”. (edie; Sustainable Brands)

General Motors (GM), the world’s third largest automaker in 2016, has announced that the company will begin shifting its production to an all-electric future by launching two new electric models next year and an additional 18 by 2023. Mark Reuss, Chief of Global Product Development, avoided naming the year when the firm will cease producing gas and diesel vehicles, but stated that GM was “committed to driving increased usage and acceptance of electric vehicles” through a two-pronged approach: battery electric and hydrogen fuel cell electric vehicles. In recent months, Tesla unveiled the company’s first mass market electric vehicle, joining companies such as Ford, Volvo, Nissan, Aston Martin and Jaguar Land Rover, all of whom are vying for market space. (Washington Post)

Salesforce Ventures, the venture capital arm of US software company Salesforce, has created a $50 million fund dedicated explicitly to software startups “that can drive positive social change”. Eligible startups include organisations that work on services for workforce development, tools that promote opportunities for women or under-represented groups, that create better access to clean energy options or that improve supply chain performance, and apps that help non-profits or NGOs achieve their missions and interact with partners, donors and volunteers. Entrepreneurs must be using Salesforce applications or technologies to benefit from the Fund, just like the other 250-plus companies that the company has funded since 2009. (GreenBiz)

A new report by Transparency International Australia has revealed the links between mining companies, politicians and lobbyists in Queensland and Western Australia, warning a mining approval process “susceptible to corruption”. Based on 47 interviews with experts from government, industry, civil society, academics, indigenous owners and consultants, the report highlights a long list of key weaknesses, including the “revolving doors” of personnel between government and industry, political donations regimes, and inadequate due diligence investigation into the companies and individuals applying for mining leases. In Queensland, although mining proponents are required to provide details of their environmental record, there is no requirement to report non-compliance with environmental law outside Australia. Indian mining giant Adani – recently fined for its unauthorised release of coal-laden stormwater into the sea – was pointed as an example. (Guardian)