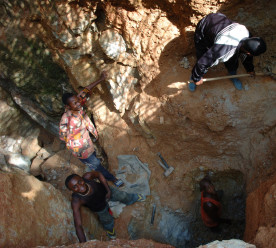 Barely 3% of Britain’s most powerful and influential people are from black and minority ethnic groups (BAME), according to a new analysis by the Guardian and Operation Black Vote. The report found that out of just over 1,000 of the UK’s top political, financial, judicial, cultural and security, only 36 (3.4%) were BAME and only 7 (0.7%) were BAME women. In sectors such as security services or top consultancies and law firms, there was no non-white in top level roles. This data amplifies a recent report which found that while 14% of the UK working age population are from a BAME background, only 6% hold top management positions. Speaking this weekend, Mayor of London Sadiq Khan identified “confidence about applying for jobs” as a key factor in holding BAME people back. (Guardian)

Alongside an update of its annual child labour report, the US Department of Labor has released a new mobile app designed to help businesses root out child labour and forced labour from global supply chains. The free mobile app, ‘Comply Chain’, provides detailed guidance on how to develop robust social compliance systems and assist companies, including suppliers, in identifying, rectifying, and preventing labour abuses in their global supply chains. In addition, an updated version of the ‘Sweat & Toil’ smartphone app was released, which contains information on goods produced by child labour or forced labour. (US Department of Labor)

First batch of African Fairtrade gold arrives in the UK

The Fairtrade Foundation has announced it will commence support for small-scale gold mining sites in East Africa in a bid to boost the transparency of the gold supply chain. The initiative will receive support from Philips and Fairphone, which makes remanufactured and modular mobile phones. The first shipment of the certified gold, sourced from Uganda, will take place in October through purchases from CRED Jewellers, and supported by the Environmental Women in Action for Development. In Uganda, 130,000 people are involved in artisanal gold-mining and produce enough gold for 82 million mobile phones, most of which is mined or exported illegally. Tech companies have been warned that human rights violations may occur in supply chains if they fail to examine risks outside of the traditional homes of conflict minerals. (edie)

Uber’s chief executive has apologised for the taxi app’s mistakes, after the company lost its license to operate in London over a “lack of corporate responsibility”. Uber’s London licence is currently set to expire on 30 September. Dara Khosrowshahi, who replaced Uber’s embattled CEO Travis Kalanick in August, said the company would “appeal [against] the decision on behalf of millions of Londoners, but we do so with the knowledge that we must also change.” Meanwhile, the director of Australia’s Transport Workers Union (TWU) has requested an audit to ensure that Uber is allowed to operate “only if it can meet community expectations about safety and fairness, both for drivers and consumers”.  Australia’s Fair Work Ombudsman is examining whether Uber drivers’ contracts breach federal workplace laws, but the TWU also has concerns about the employment structure of ride-sharing platforms “built on poor safety, weak oversight and exploitation of drivers”. (Guardian: 1;2)

Chile to ban plastic bags in all coastal cities

Speaking at the UN General Assembly, Chile President Michele Bachelet has announced the country will prohibit the use of plastic bags in all its coastal cities within the next 12 months. As the first country in the Americas to enact such law, she “urge[d] other countries to take on this responsibility” and said beach clean-ups during peak vacation times should complement the law. Chile’s environment minister Marcelo Mena said the bill will be sent to Congress in October and should pass without difficulty as similar initiatives are already in place in some coastal communities. If passed, businesses found using and distributing the bags could face a US$300 fine. (Santiago Times)