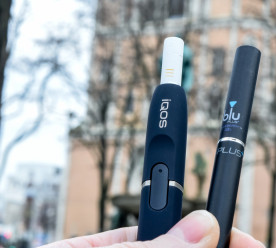 After reaching its 80% carbon reduction target (against a 1996 baseline) four years early, telecoms company BT has announced a new science-based target to reduce emissions by a further 87% by 2030, against a 2016/17 baseline. BT said it will seek innovative ways to reduce its dependency on fossil fuels, explore the adoption of low-carbon vehicles into its fleet and target the carbon intensity of its buildings. Chief sustainability officer Niall Dunne said technology has played “both [a] profound and exciting” role to save resources and benefit “customers, suppliers and people”. Working with the Carbon Trust, the firm has been able to extend a commitment to 100% renewable energy worldwide by 2020 – which currently stands at 82% – and support suppliers with an online sustainability assessor and help consumers reduce emissions by at least three times. (edie)

Philip Morris International (PMI) has published its new sustainability report which outlines a fundamental shift to its business, with investments of more than $1.7 billion to build or convert its factories for the production of smoke-free products, particularly products based on heating tobacco to release flavours and nicotine without combustion. By 2025, the company expects at least 30% of its sales volume to come from smoke-free products and at least 40 million consumers to have switched to its smoke-free alternatives. Since 2008, PMI has invested more than $3 billion in R&D, production capacity, scientific substantiation and studies on adult smoker understanding of smoke free products. The report also highlights other sustainability achievements, notably with regards to climate change, labour conditions in tobacco agriculture, gender equality and employee well-being. (Business Wire)

Property giant City Developments (CDL), healthcare firm Singapore O&G and United Overseas Bank have been rewarded during the first Singapore Sustainability Reporting Awards, organised by the Singapore Institute of Directors and EY Singapore to push local companies to embrace sustainability. Supported by the Singapore Exchange (SGX), the awards honour listed firms that have started issuing sustainability reports ahead of an SGX-rule that makes the practice mandatory after December 31. In a statement, CDL’s chief sustainability officer Esther An explained that “reputational and operational risks” threatened Singapore businesses “that do not adopt sustainable practices” and “exposed [them] to higher operating costs, with the water price increase and impending carbon tax”. (Straits Times)

According to new research commissioned by HSBC, more than two-thirds (68%) of global investors intend to increase their low-carbon related investments to accelerate the transition to a clean energy economy. The appetite is strongest in Europe (97%), the Americas (85%) and Asia (68%) while the Middle East experienced a decline in this trend over the year. Based on the survey of a thousand companies and institutional investors globally, the research also found that only 43% of companies actively disclosed their environmental strategy and that more than 1 in 2 investors (56%) described current climate-related disclosure levels as ‘highly inadequate’. The main drivers of increased transparency were found to be investor pressure and international regulation. This includes the recent  recommendations of the Financial Stability Board’s Task Force on Climate-related Financial Disclosures, which 20% of investors said they planned to follow. (HSBC)

An artificially intelligent chatbot that provides free legal advice has been configured to help victims sue credit report giant Equifax without a lawyer, following revelations of a data breach that is believed to have affected hundreds of millions of customers worldwide. The DoNotPay robot lawyer generates documents US consumers can take to the small claims court and sue Equifax for up to $25,000. Equifax is offering free credit monitoring and identity theft protection for a year to those affected by the hack, and has committed to working with regulators in the US, UK and Canada on next steps. DoNotPay was invented by an undergraduate at Stanford University, who originally designed the service to help appeal against parking or speeding tickets, and later adapted it to help asylum seekers with immigration applications. (BBC)